The Mill’s Campfire team collaborated with TNT to create a storytelling experience to promote the premiere of The Alienist: Angel of Darkness. Our goal was to deliver fans into the world of The Alienist, providing a sneak peek into the season to come and immersing the audience in the turn of the century New York City culture that sets the stage for the series.

The Alienist: Angel of Darkness is set in a time and place with truly iconic aesthetics and cultural characteristics. The Campfire team developed a program centered around show character Sara Howard, and particularly her fondness for whiskey, to immerse fans in the era of the new season. In partnership with world-renowned cocktail institution Death & Co and premium spirits producer Brown-Forman, Campfire created a story box enveloping the era of The Alienist – and offering a glimpse into the world of Sara Howard with exclusive items from five iconic brand contributors. Three unique video assets followed, filmed with Death & Co’s head bartender Shannon Tebay and the series’ star Dakota Fanning, to bring fans a step closer into the lives of the characters and the culture of the period, and introduce the exclusive Angel of Darkness­­-inspired cocktails created by Death & Co.

Over 100 story boxes were delivered to influencers, super fans, cocktail connoisseurs, celebrities, and press in the week leading up to the premiere, resulting in online buzz by way of social sharing, unboxing videos and photos, in-depth coverage and show reviews: Earned media coverage garnered over 8M impressions, earned social posts were shared by influencers and partners with a combined following of over 8.8M followers, paid influence social posts were shared by four influencers with a combined following of over 355K followers.

Set in 1897 New York, Angel of Darkness follows Sara Howard (Dakota Fanning) as she reunites with Dr. Laszlo Kreizler (Daniel Brühl) and John Moore (Luke Evans) to uncover a new killer – this time with Sara’s own newly founded detective agency leading the way. We were able to invite fans into the world of the show while paying homage to the history of the era with our partners Brown-Forman and Death & Co.

The story box sent out to fans, journalists, and influencers contained a narrative built around 1897 New York City as Sara Howard sees it, and the ways in which she personally plays her part within it – from her choice of drink to dress to dining. Some of the greatest classic and pioneering brands contributed elements, from Death & Co and Brown-Forman, to Bergdorf Goodman, D.S. & Durga, and Delmonico’s Steak House.

The kits included engraved Sara Howard signature bottles of Old Forester 1897 Bottled in Bond bourbon whiskey, crafted and produced by Brown-Forman, as well as custom recipe cards detailing the ten exclusive Angel of Darkness-inspired cocktails created by the bartenders at Death & Co, and a set of old fashioned glasses selected by their team. The drinks themselves continued to be available throughout the summer at open Death & Co establishments. Brown-Forman applied custom Alienist hangtags to bottles of Old Forester 1897 in retail stores across key markets NYC and LA.

We also included a silk fabric square from The Alienist Edit, Bergdorf Goodman’s curated selection of merchandise inspired by the acclaimed costume design and time period of the series, and a custom fragrance First Light Five Boroughs, crafted by parfumerie D.S. & Durga. A bottle of the New York City icon Delmonico’s Classic 1837 steak sauce was the final piece, highlighting TNT’s partnership with Delmonico’s to give back to the city, as they made and delivered meals to healthcare workers and the New York community impacted by the COVID-19 pandemic. 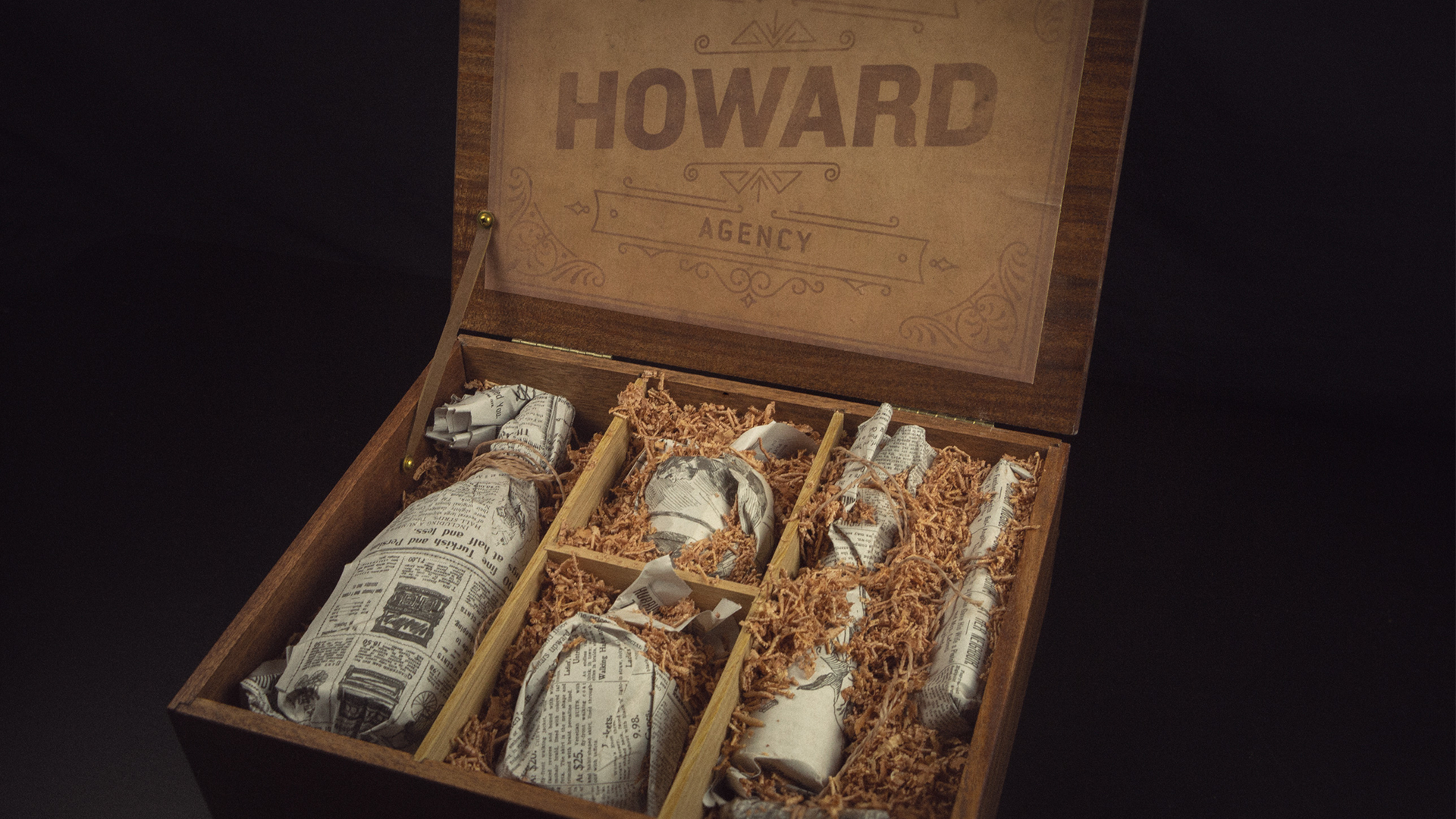 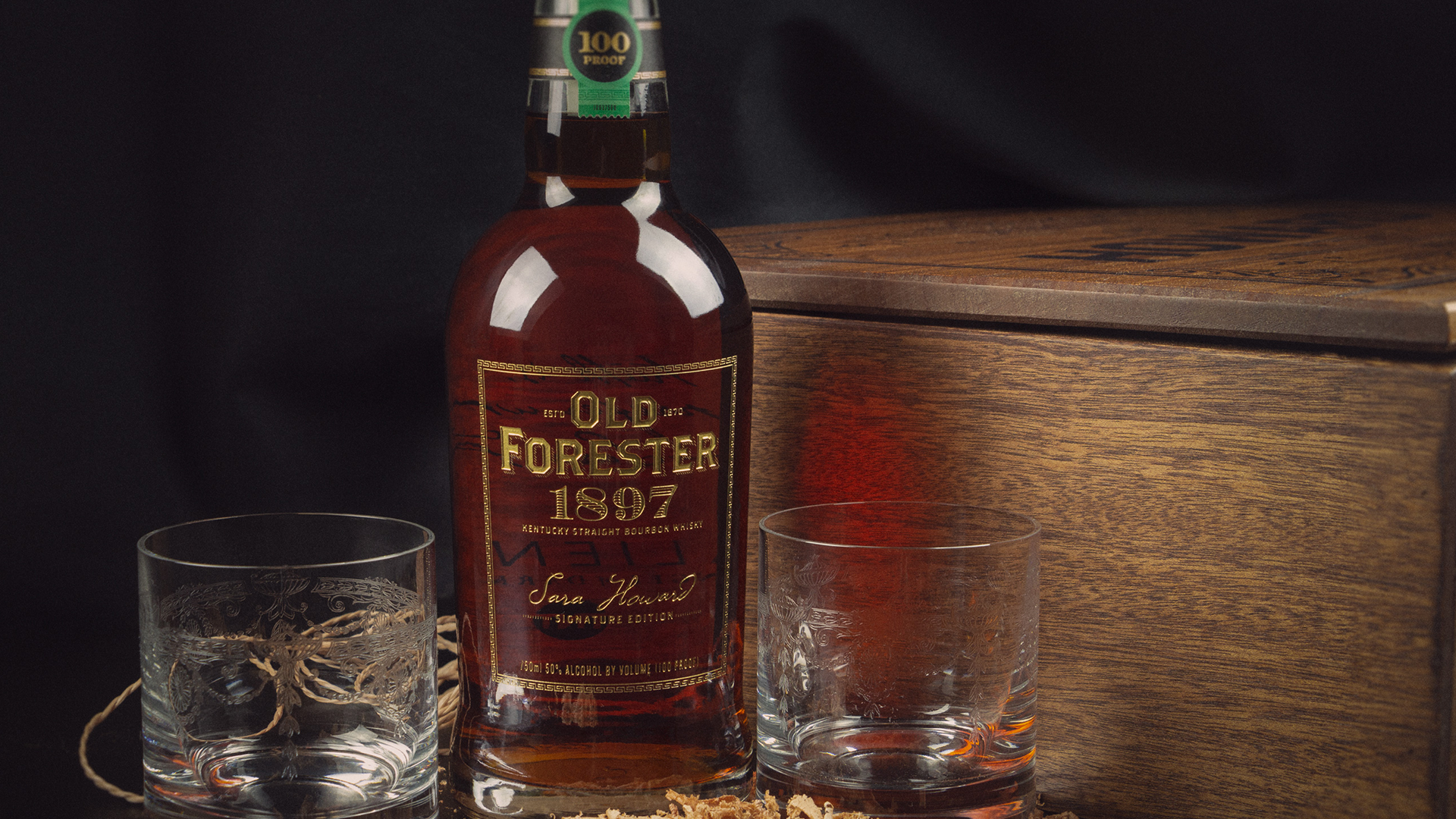 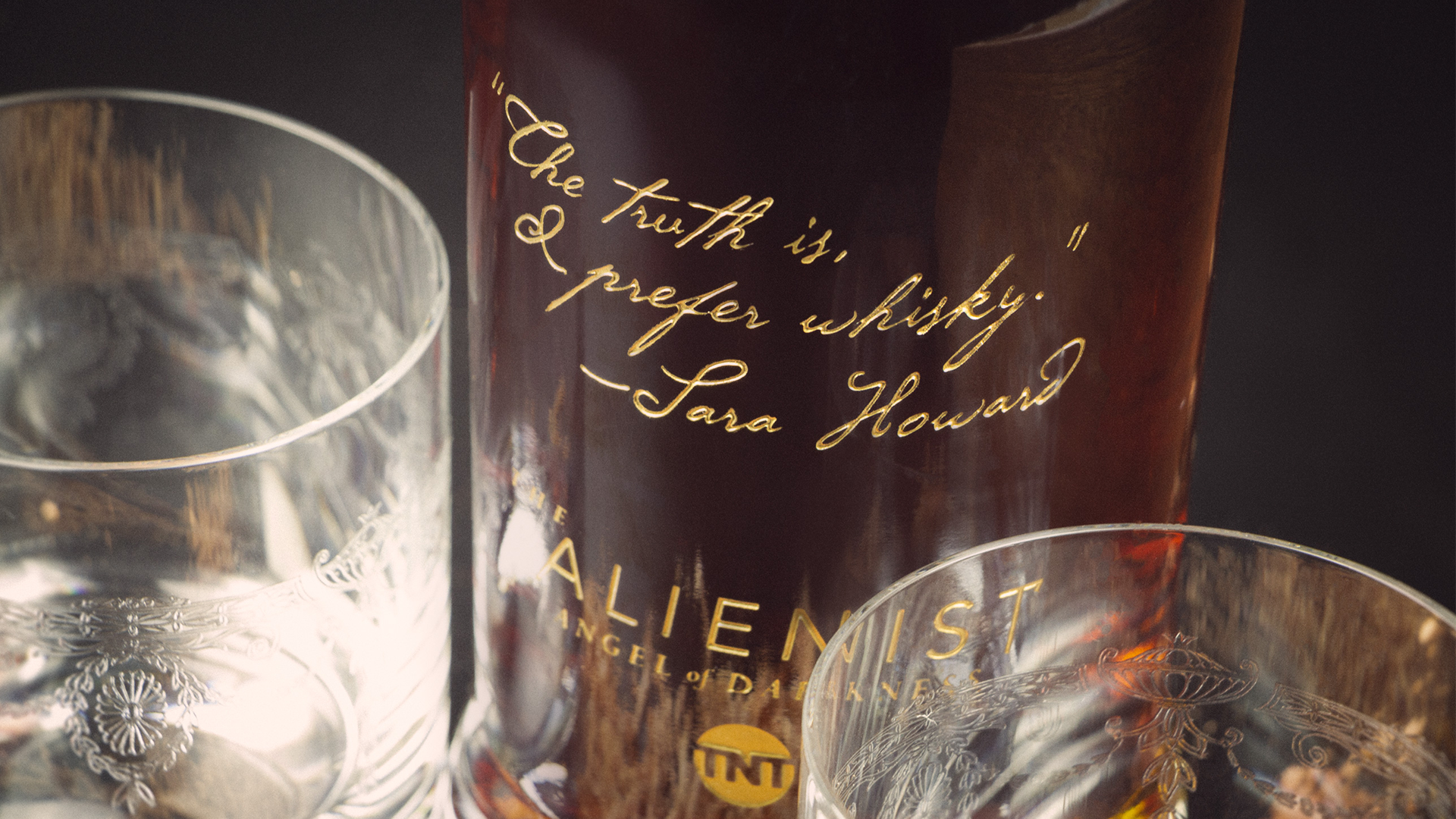 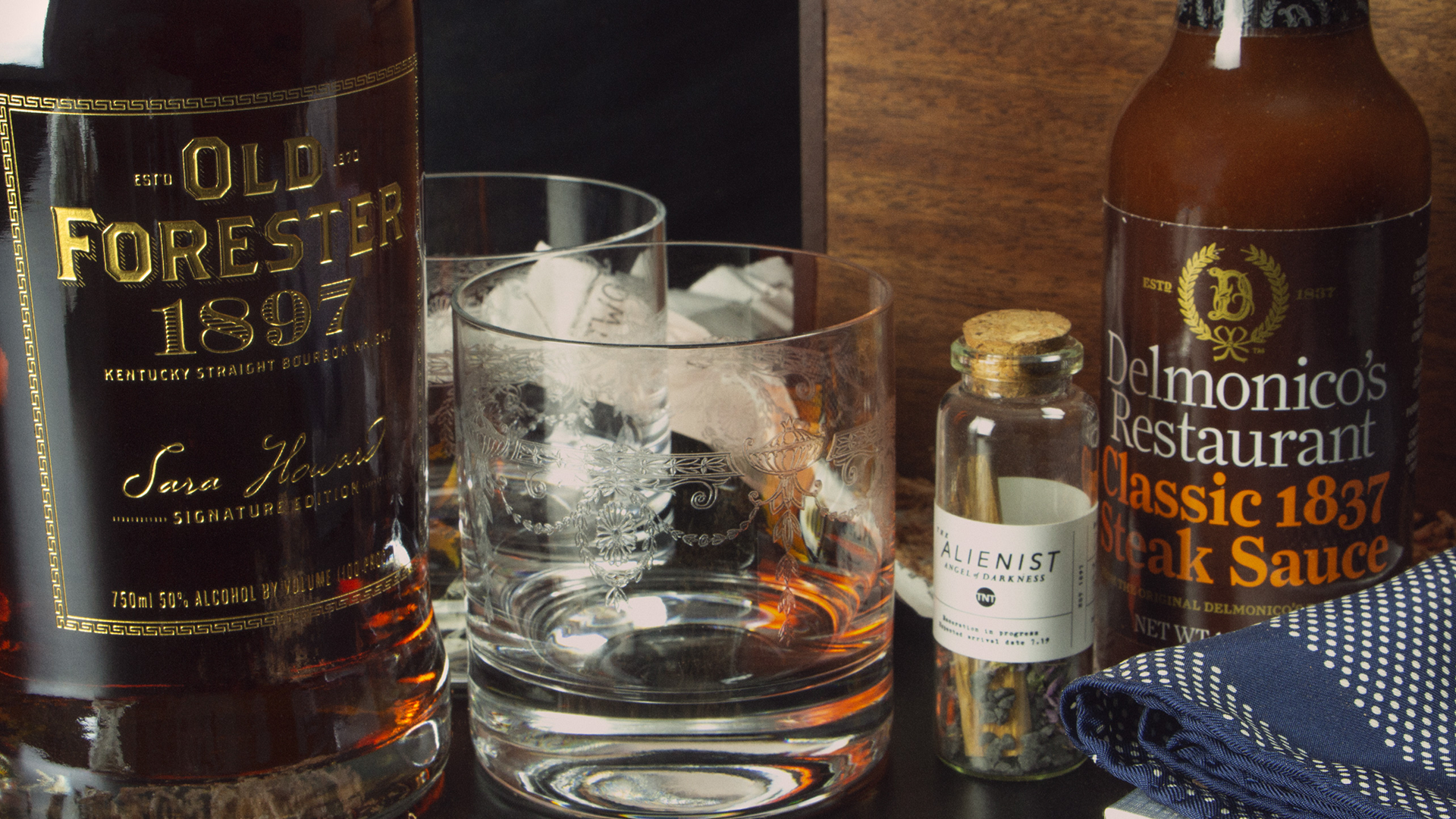 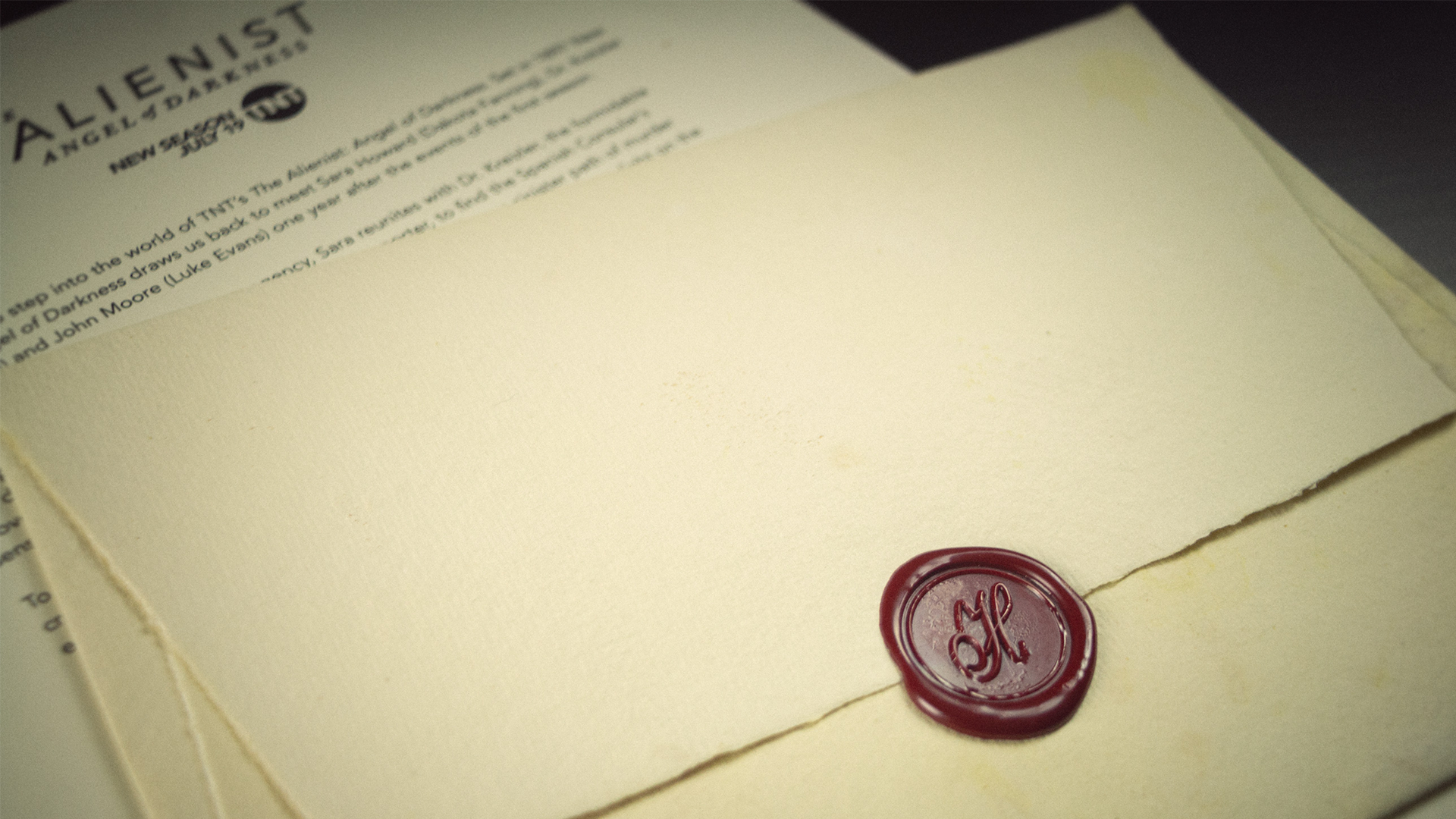 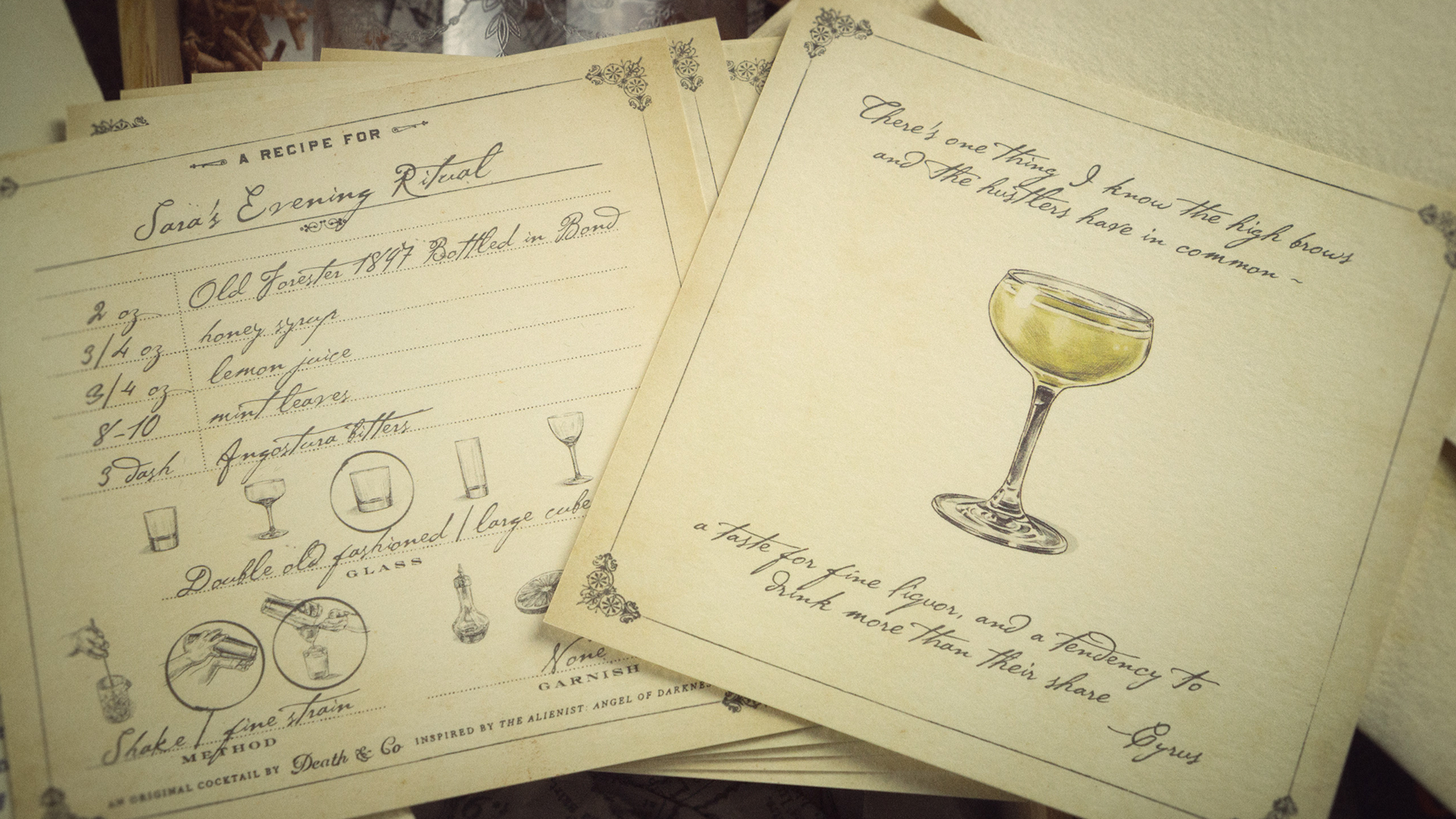 From there, we worked to create three unique video assets for the launch of Angel of Darkness. Filmed at Death & Co’s New York City flagship and led by head bartender Shannon Tebay, two of our video pieces detailed the recipe instructions for two of the cocktails inspired by characters from the show, Sara’s Evening Ritual and Kreizler’s Glass. Shannon walked the audience through the drinks, and provided her own insight into the world of the show and New York City turn of the century cocktail culture.

The third video was an exclusive Zoom cocktail hour featuring Dakota Fanning and Douglas Smith (who portrays Marcus Isaacson in the series), with Shannon leading the stars through the recipe for Sara’s Evening Ritual. The three discussed the show, the characters, and their own experience making and drinking cocktails, while learning bartending tricks of the trade, and enjoying the drinks together.

Alongside being shared on TNT’s social channels, the video content appeared on a dedicated Angel of Darkness page created with ReserveBar.com. The ReserveBar page included the recipe for the cocktail Sara’s Evening Ritual, and provided fans the opportunity to purchase the ingredients and tools needed to make the drink. 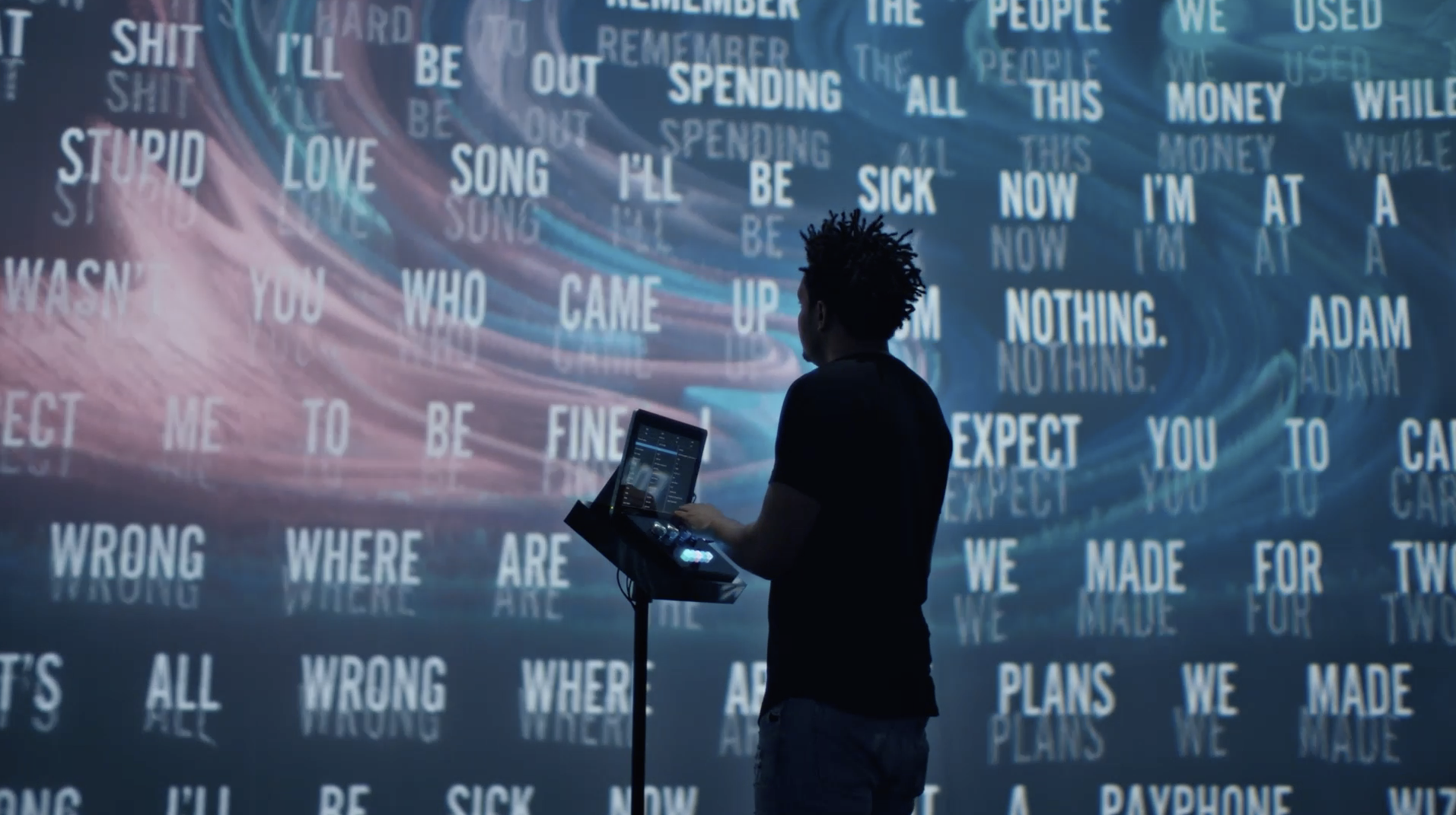 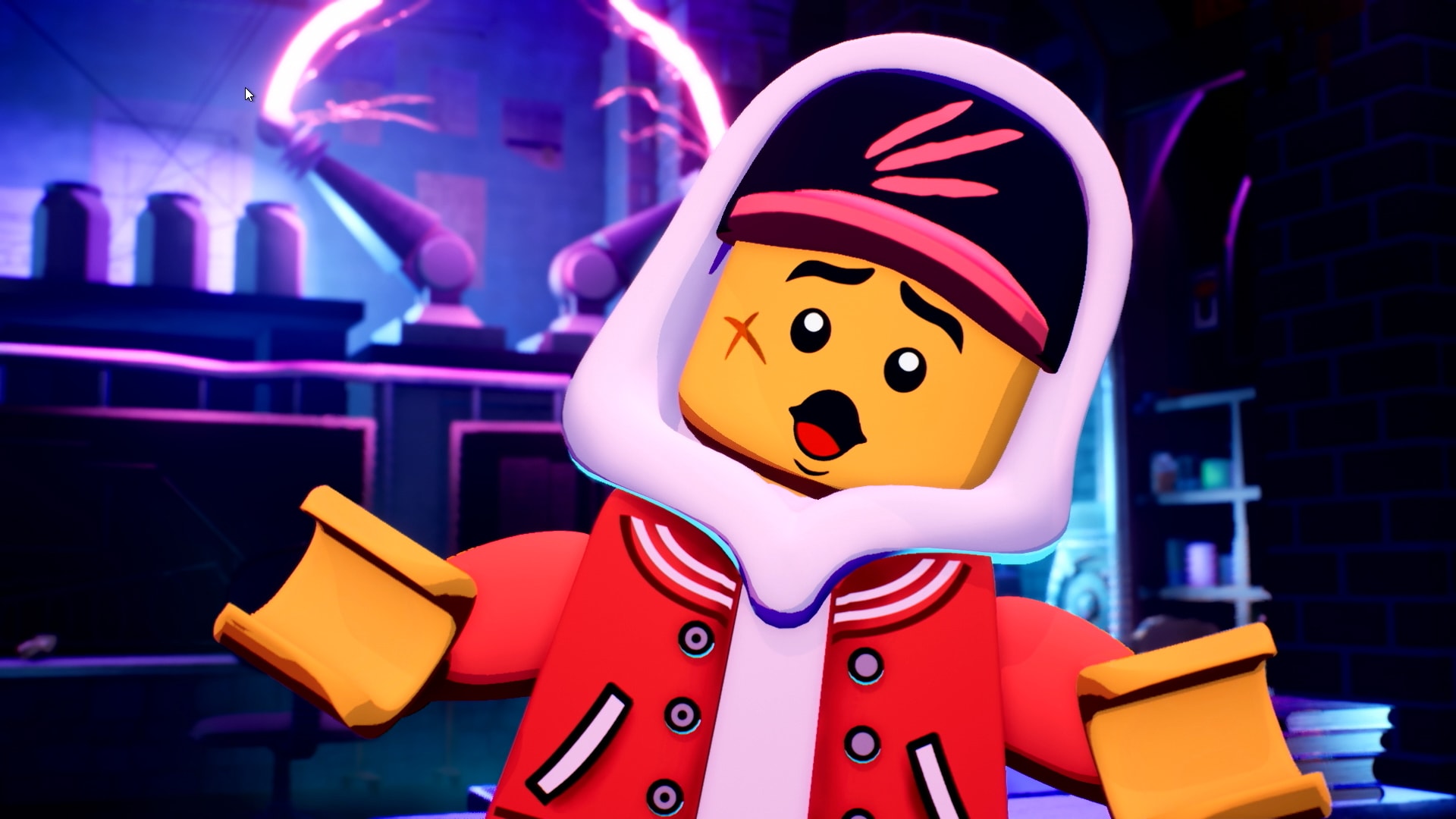