“​It was absolute madness to make this series,” said Guillermo del Toro about Cabinet of Curiosities, his horror anthology series for Netflix.

The filmmaker behind The Devil’s Backbone (2001), Pan’s Labyrinth (2006) and Crimson Peak (2015) said that, aside from being a fascinating new project to helm, the series is his means of uplifting a new generation of genre filmmakers. “Look, I’m 58 and I have a 30 year career,” del Toro told Indiewire. “It’s a miracle that you can last three decades as a storyteller. If I can do something to usher in a variation of the genre, I like it.”

The collection of spooky stories features a slew of handpicked directors including Ana Lily Amirpour (A Girl Walks Home Alone at Night), Jennifer Kent (The Babadook) and Vincenzo Natali (Splice). Very much in the vein of the 1950s CBS series Alfred Hitchcock Presents or The Twilight Zone, each of the show’s eight episodes has a preamble featuring del Toro himself, dressed in a suit and addressing the audience to introduce the tale at hand. 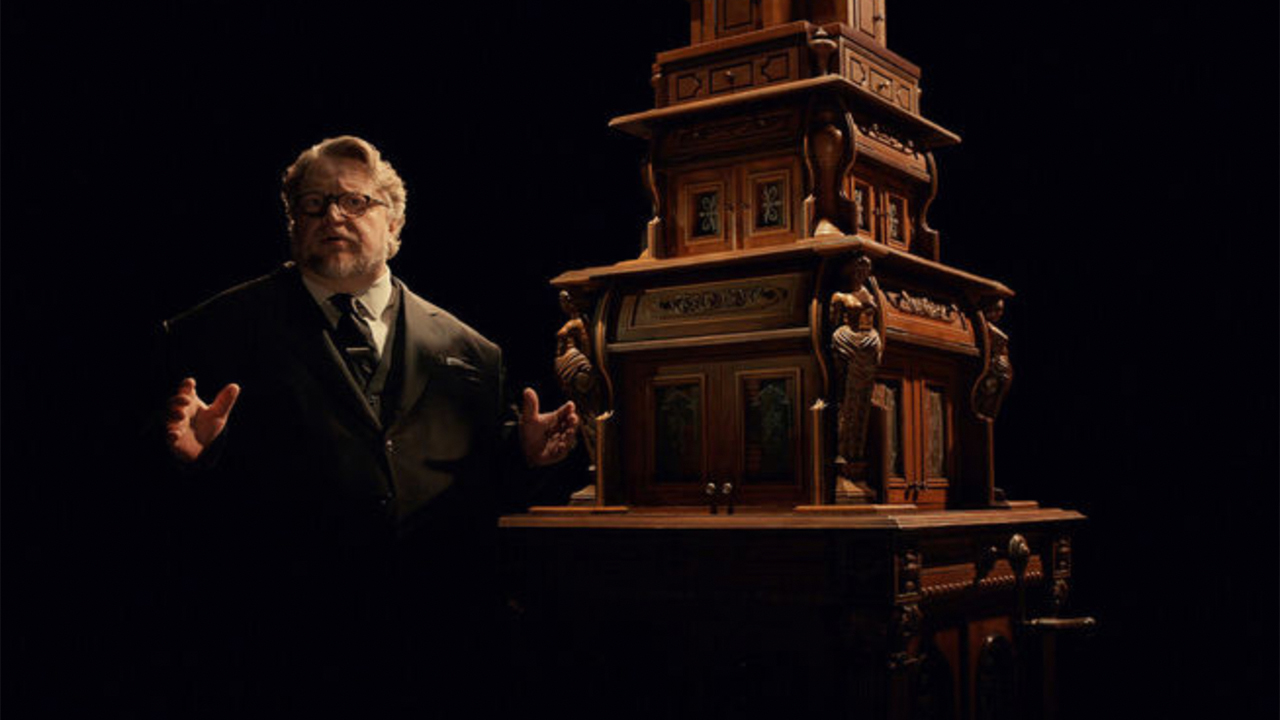 Guillermo del Toro and the titular cabinet from the opening scenes of Cabinet of Curiosities.

Every introduction sees del Toro opening a different section of a large wooden cabinet, removing an item thematically related to the episode, and placing it on a table next to a statuette depicting the director du jour. 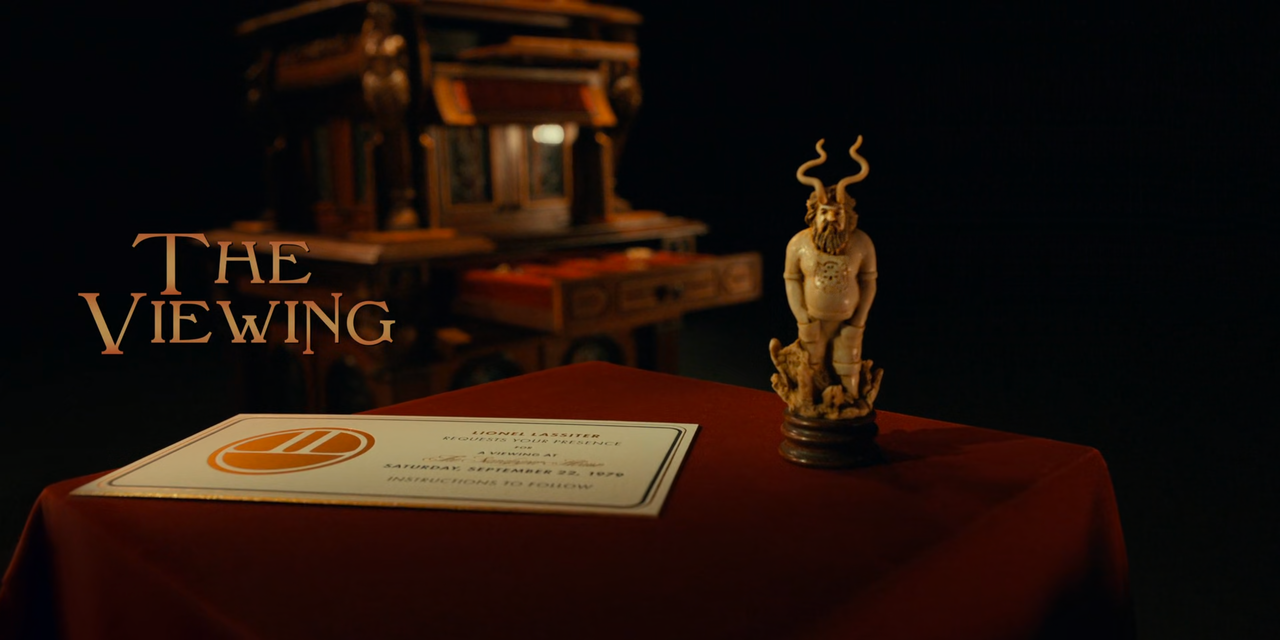 These statuettes were a surprise to the episode directors who learned of them after the show had wrapped production and they received them in the mail.

“The fact that he mentioned the director’s name — let alone made a statue of the director! It’s nothing Alfred Hitchcock ever did,” said Vincenzo Natali, the director of episode two, Graveyard Rats, speaking with Den of Geek. David Prior, director of episode three, The Autopsy, said in an interview with ScreenRant that he had no idea what the statuette was until he saw it used in the show and thought it was wonderful. “I love his intros, I think they’re great…,” he said. “I love the prop that they built, the cabinet is gorgeous, it’s a wonderful bit of filigree that I think elevates the whole series.”

Between these spoken introductions and the various realms of the episodes, there is a gateway, a space of strange possibility that must be traversed. The journey into Guillermo del Toro’s Cabinet of Curiosities is encapsulated by a title sequence of shifting proportions, a curated cascade of once-creatures, spent spells and mystical imaginings. 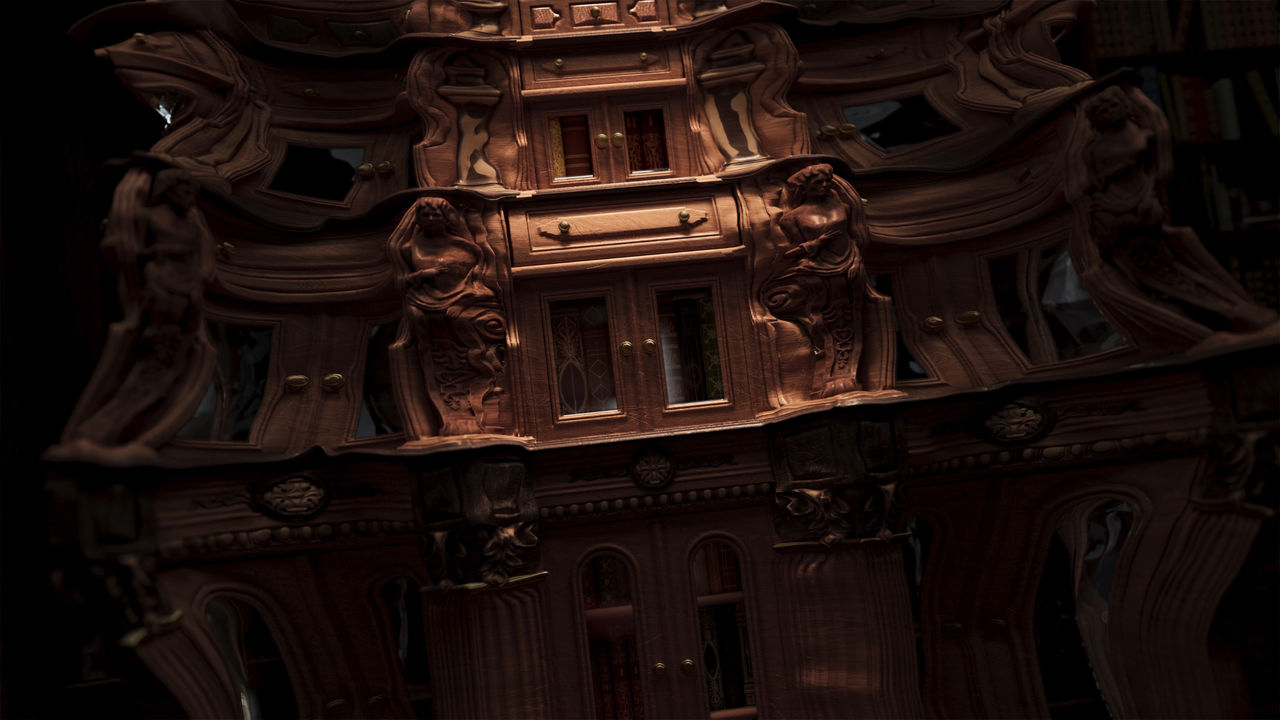 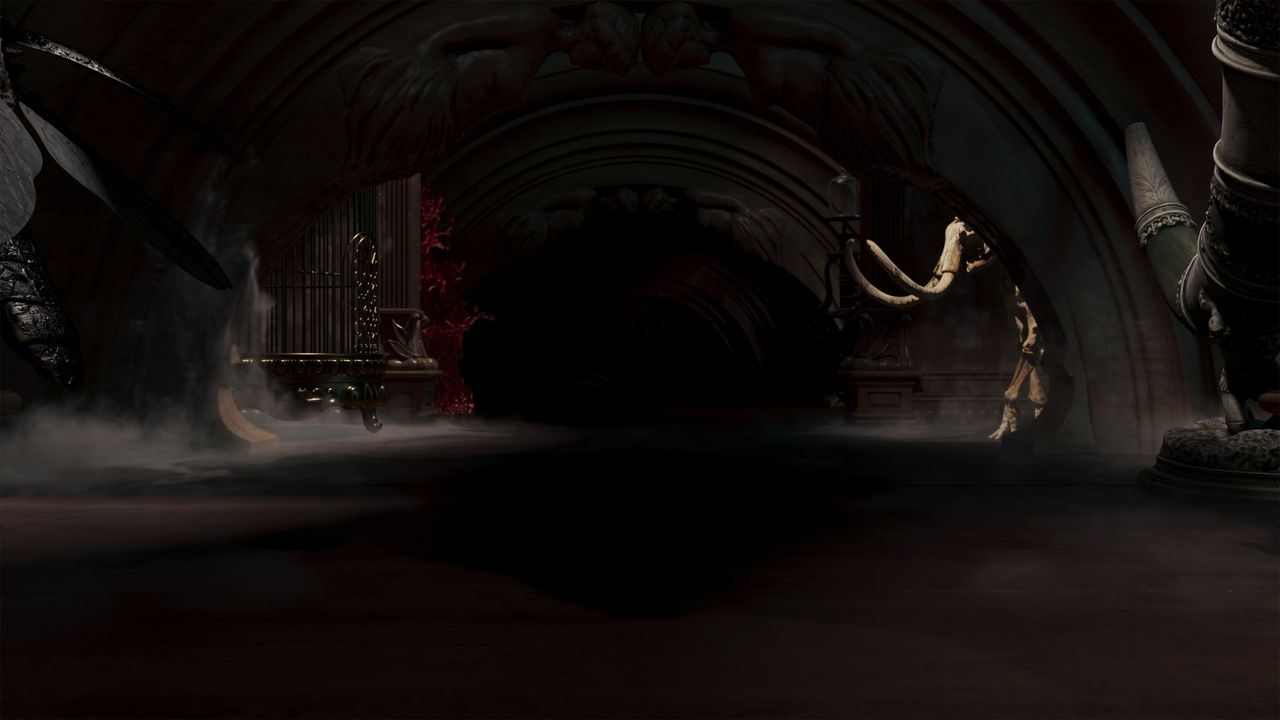 A set of doors swings open and a wave of cabinetry engulfs the viewer, revealing a twilit hallway lined with curios. Thrones of coral and eggs of gold, sneering faces and mirrors holding worlds unknown. There are automatons and gilded keys, an ossiferous vortex and a mechanical skull, a hideous mermaid and a hand reaching from the depths of the dead.

“Del Toro’s so open with his sources and what matters to him, so we knew what would vibe with him,” says creative director Chet Hirsch of The Mill, the production studio behind the opening title sequence. The team at The Mill also knew that the show would be adapting two Lovecraft stories. “Pickman’s Model and Dreams in the Witch House I’d read as a kid,” says Hirsch.

“During the pitch I started researching these cabinets — what they used to be,” says designer Akshay Tiwari. “I gravitated toward this idea of how wealthier people would travel and collect these curiosities in one place. A combination of luxurious, exotic-looking things placed with more macabre-looking stuff.”

The Mill team was instructed not to give away any of the show’s frights in the titles. “We came up with all these different things which allude to what’s in the series but it’s still not spoiling anything,” says Tiwari. “That was kind of challenging.”

“We started picking up speed when we started thinking, well, all these worlds contain shifting pathways to other worlds; it’s not really a scale thing, it’s a connection and coexistence thing,” says Hirsch. “The old cabinets of curiosity would be dark and cruel but behind this scientific remove. That tone became our guide. We got a picture from the Museum of Natural History of some kind of rodent that had been flayed and split down the middle. We were all like, [whispers] ‘Oh, that’s creepy.’ When we showed it to the Cabinet folks, the EP and everyone was like, ‘Yeahhhh.’ Like, darkness but held within this idea of pretension, this curatorial aspect.” 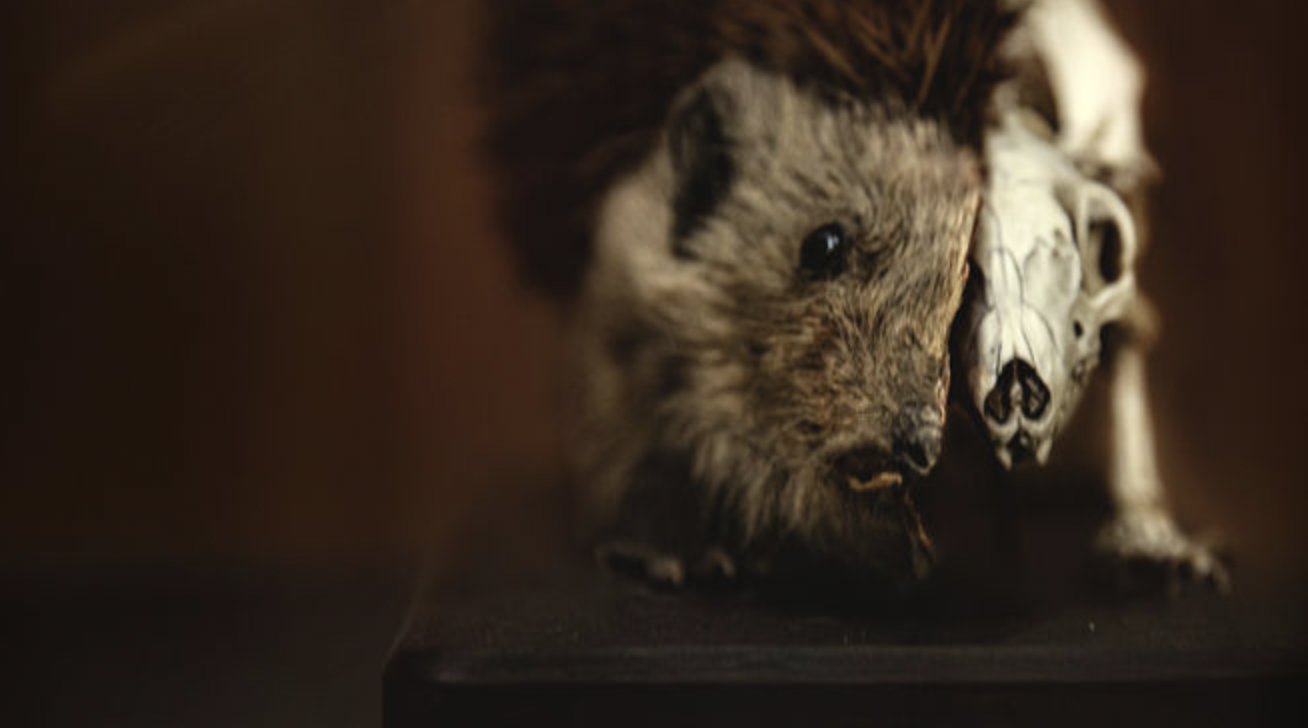 “This flayed rat photo was a key early creepshow that everyone could agree on,” says Creative Director Chet Hirsch. “It sort of set the precedent for darkness and savagery but with that clinical sense of remove that characterized the old cabinets.”

The majority of the sequence was created using 3D animation software Houdini. Smaller elements and the title typography were created in Cinema 4D and then composited in After Effects. “I sculpted a lot in Zbrush and did a lot of exploration in Houdini,” says Tiwari, who built many of the elements in the sequence alongside art director David Rowley. As The Mill progressed, del Toro’s team sent over a 3D model of the cabinet and Rowley used it to begin experimenting. 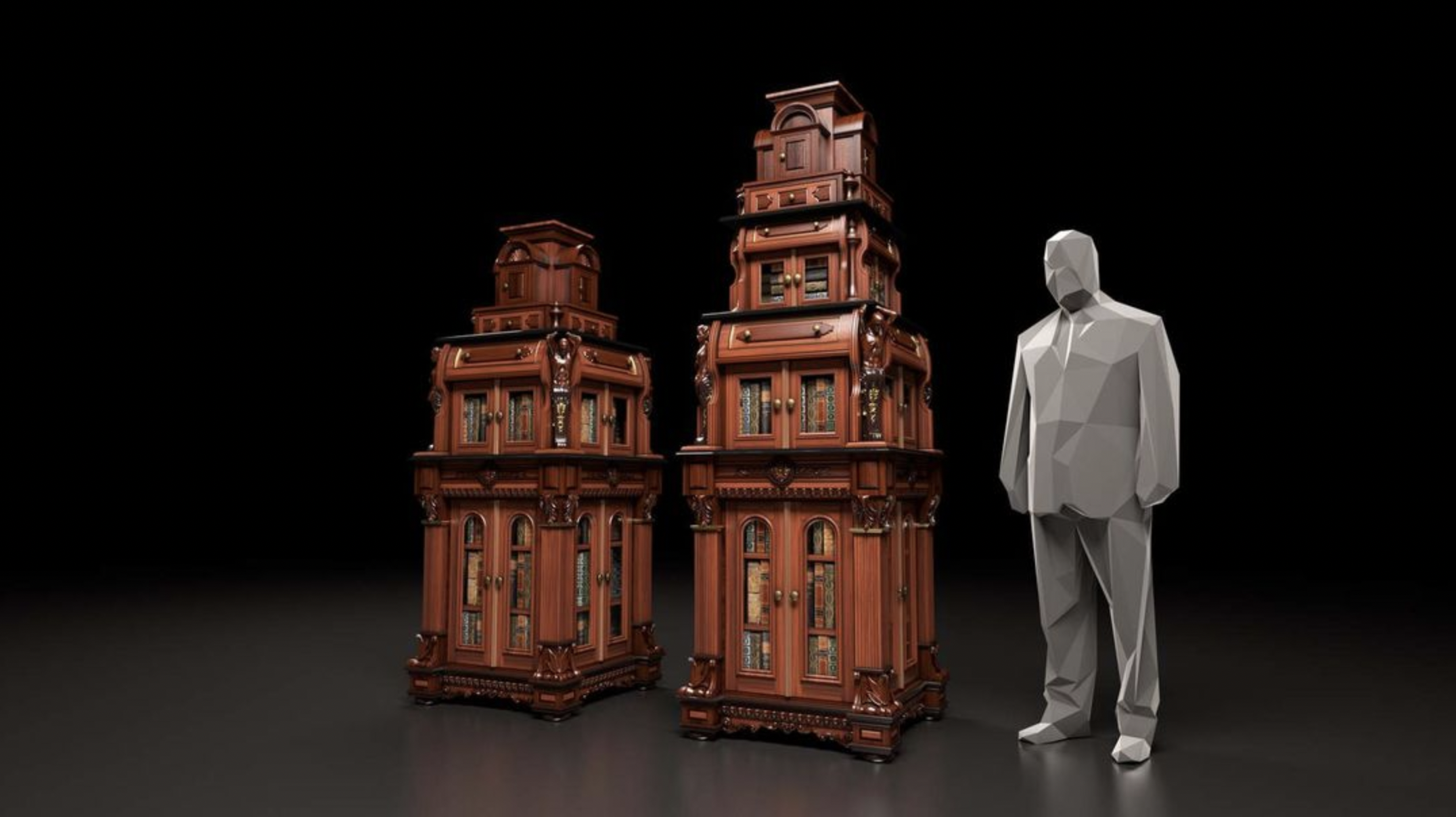 “We had some extra time between the initial pitch and the follow-up to play around in Houdini,” says Rowley. “So I thought I’d rework the model and prepare it for a cloth simulation. I started allowing the cabinet to unfurl, as if it was cloth, so that led to that opening shot, the cabinet engulfing you and bringing you into the rest of the world.”

The title lettering for the series was created by Hirsch, who found inspiration for the letterforms in Italian poetry chapbooks from the 1800s. “It’s all great letterpress stuff on super-old yellow pages and that became our guide for authenticity,” says Hirsch. “That one and the cast and crew type was based on that older style, and trying to bring in those flourishes and filigrees in that older work.” 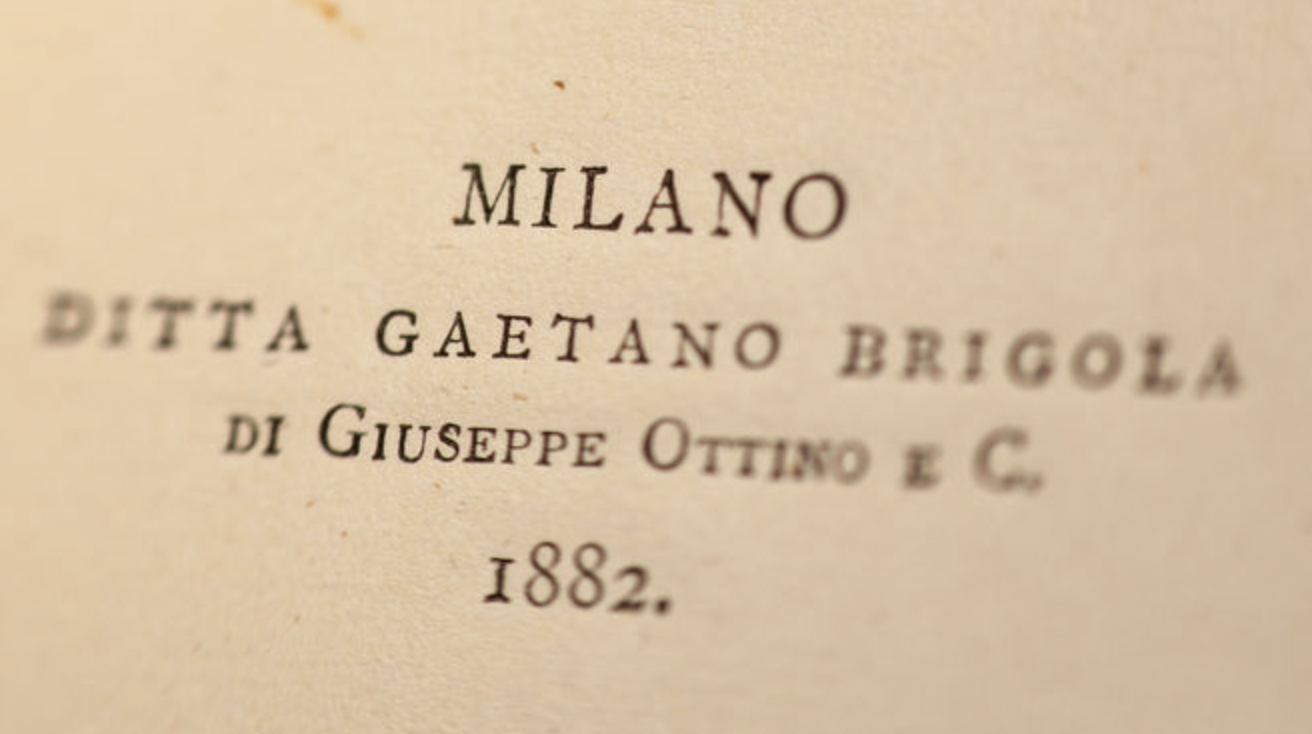 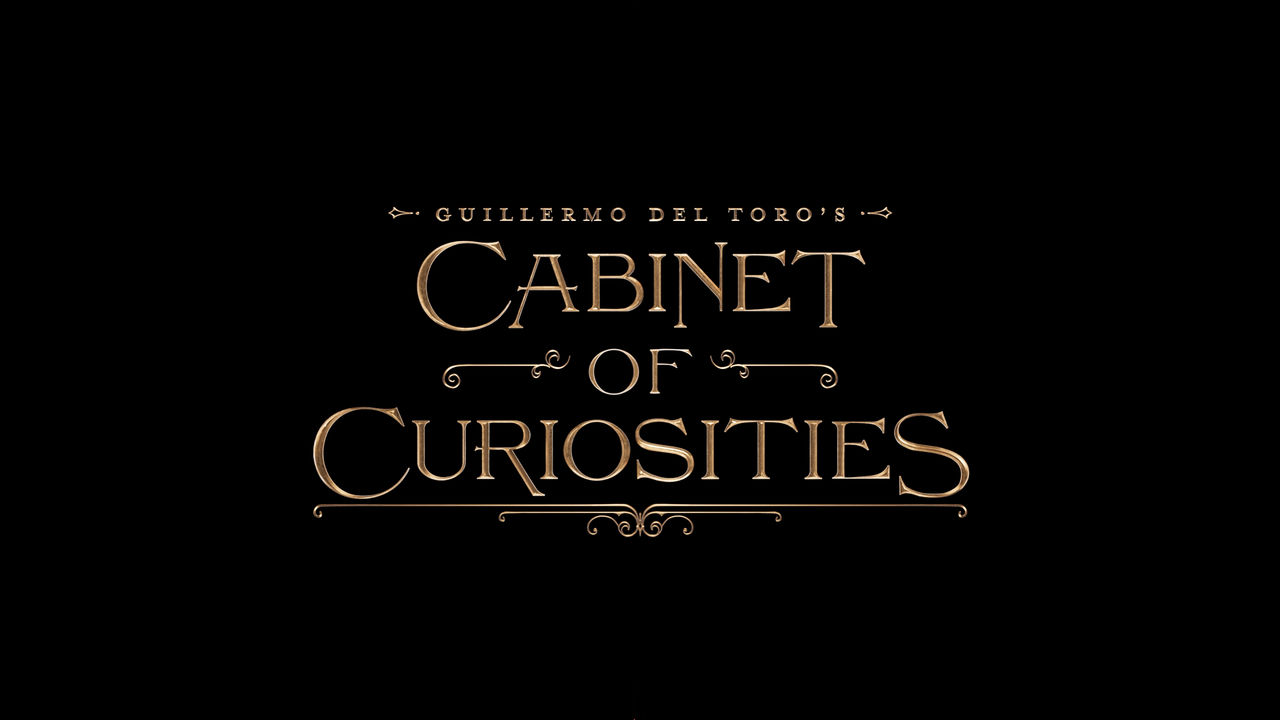 The titles for each episode, the individual episode titles and credits, were created separately, by the show’s crew.

The journey into each episode kicks off with a glide through a hallway holding a complex collection of curiosities. I ask the team at The Mill to detail these items.

First, I’m seeing a woolly mammoth skeleton, is that right?

And across from the mammoth, there’s a red, tree-like structure, or is that coral?

Akshay Tiwari: That’s a coral throne that we were concepting, right at the beginning. 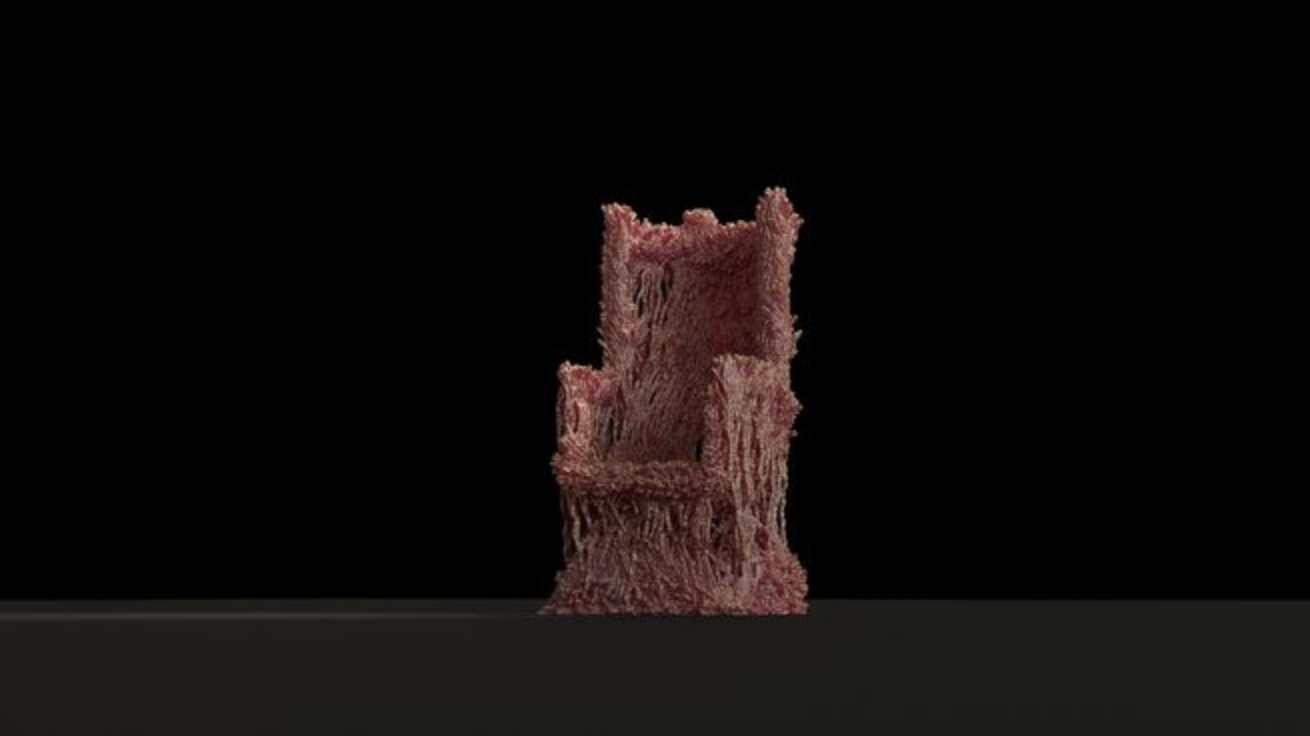 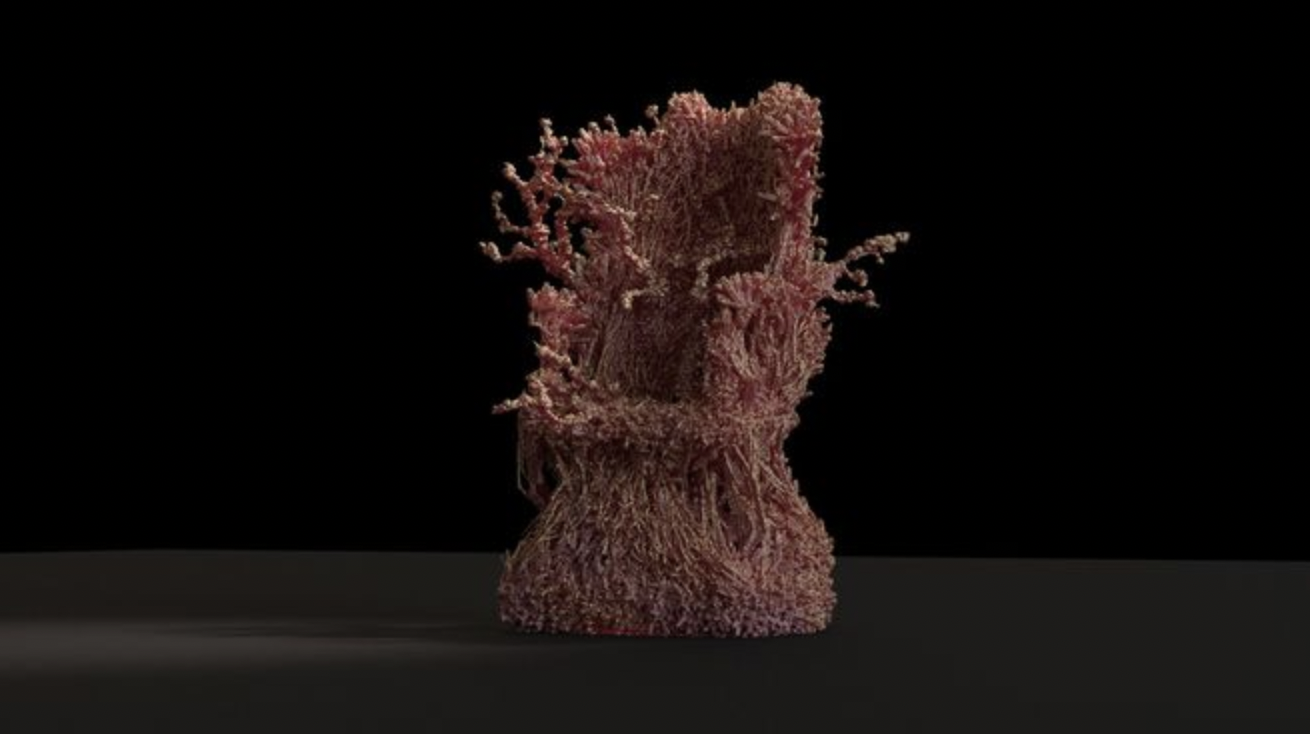 David Rowley: There are so many things like that in this piece. We wanted to get so much complexity into it. To fill the hallway, we needed so many things, we started looking at creative commons scans from museums around the world. A lot of museums post scans of their pieces.

When you say scans, you mean 3D mapping?

David: Yeah, exactly. We had to bring them in and clean them up and re-texture them but yeah, they’re public domain 3D scans. So a handful of those are in this hallway.

What’s across the hall from that big horn? It looks like something with wings?

Chet: Oh! We have the bird cage and then the horn and then a giant insect. [laughs] We wanted to feature that more originally. It’s like a moth.

David: We wanted to have an insect in there somewhere. We wanted to create confusion about scale so you wonder: are you in a huge place, are you in a tiny place? Is everything enormous? It was just creepy and curious. 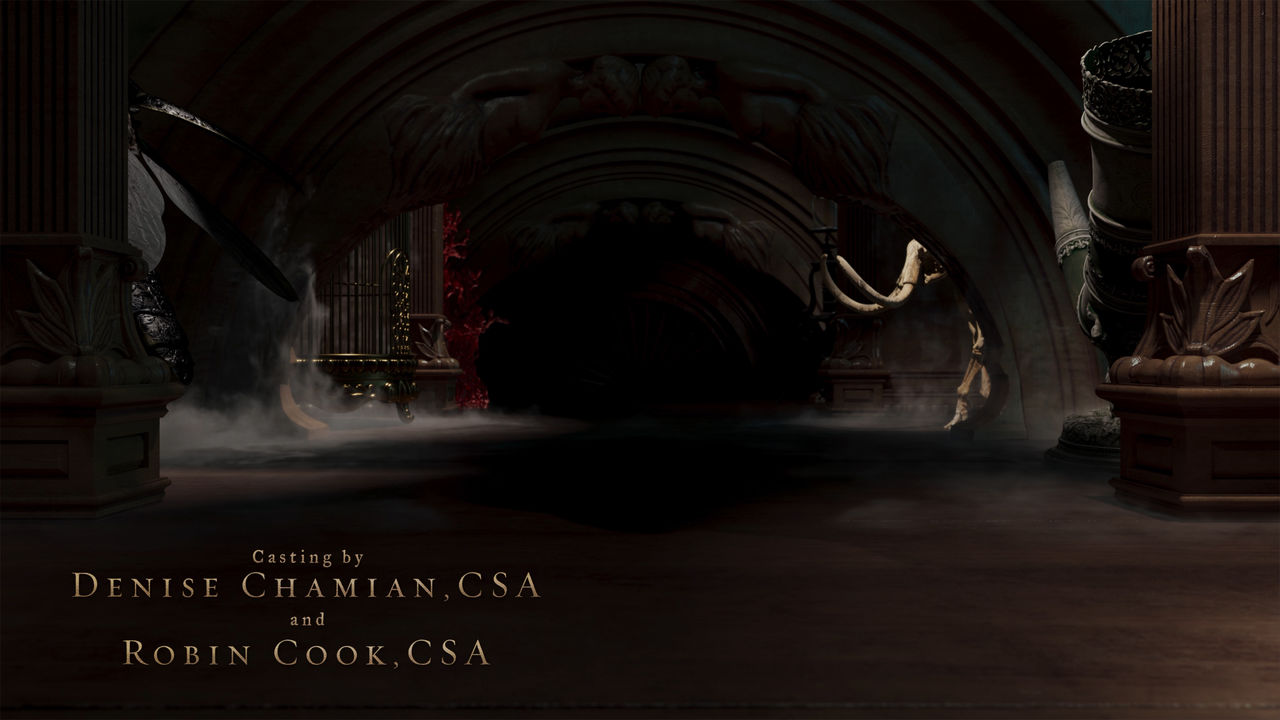 Across from the oozing, cracked egg, is that more coral?

David: More coral! It was a popular thing to collect at the time. I modeled that egg and kit-bashed it together.

Chet: Coral was precious and super-hard to get. That was another part of the brief from del Toro, to feature some red coral, because it’s a common thing you’d see in cabinets from the era. 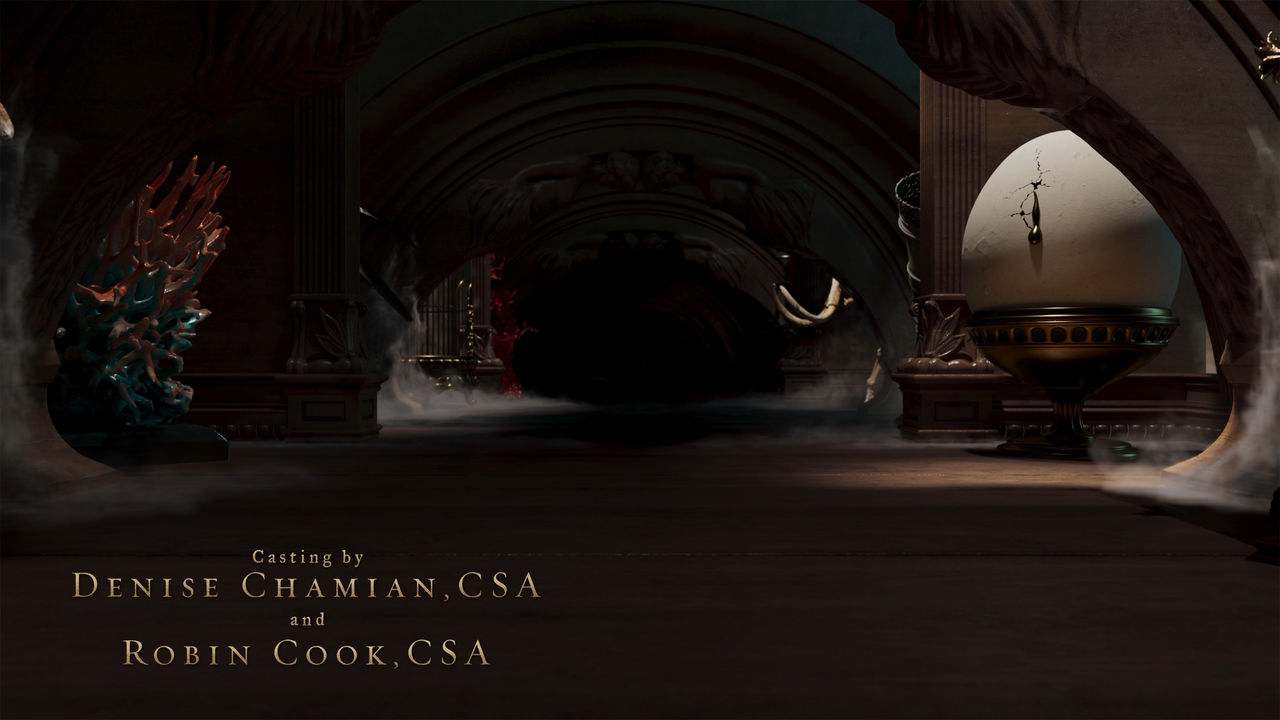 Still from the title sequence showing the hallway with a coral structure visible on the left and an oozing, cracking egg on the right

David: Every element that I built this hallway out of comes from the cabinet itself. The arch is repeated from a feature towards the top of the main cabinet, a little decorative thing. The sculptures of the women are prominently featured on the cabinet and sort of repeated here. I tried to be disciplined about making sure I didn’t model anything in this hallway from scratch.

So it’s almost as if the cabinet is this shape-shifting piece that can adapt to any size.

Chet: Exactly. Yeah, that was our overarching theme. That was the only way all these stories could coexist together, if they all live together in that kind of space.

Akshay: Chet also had a few masks at his place… [laughs]

Right, those grimacing faces, how many are there? Three? You have that in your home, Chet?

Chet: I do! [laughs] It’s on the wall in my kitchen. The mask that we scanned. I think my kids have nightmares. That one and the black one that features right at the tail-end of this shot, the black, Eyes Wide Shut-looking mask on the right, they’ve been spawning nightmares for years!

Discover the full interview via Art of the Title.

You can get in touch with our Design Studio here.