“While other people were watching box sets during lock-down, I was having fun blow-torching piano wire to shove up a fluffy chicken…”

What was the inspiration behind these films?

‘Birdfeeder’ is a series of ongoing short sketches based on an idea for a longer film.  I’ve wanted to make a short film featuring the Evel Knievel toy for years; he was my hero as a child (and adult) and I love his bold attitude and style.  I’m also inspired by personal stories from growing up with two older brothers – where being buried up to my neck in nuts and left out for the birds wasn’t an unusual occurrence for me!  So these shorts are a kind of ‘sketchbook’ for the final film, which features Evel constantly being persecuted by fluffy toys – in particular a vicious chicken.

At this stage, they’re simply bite-sized sketches to test out silly ideas. There’s no major story arc to the shorts, other than Evel going about his daily business then being attacked in different ways – a bit like ‘Roadrunner VS Wile E Coyote’.  This way I can keep the script short and simple, and enjoy developing ideas for interesting shot dynamics and set-ups which I might want to use again later – for example testing out lenses and/or incorporating 2D/3D elements using AfterFX/Blender.

I shot ‘Beach’ and ‘Shower’ whilst out in LA directing a series of Barbie commercials. I had a free weekend and wanted to test out my iPhone with a few recently purchased lenses. I thought ‘What better way than to spend it on the beach with a semi-naked toy pretending to be chased by a chicken!’ – I’m not sure what the beach-goers thought but the neighbours in my Airbnb are probably still baffled by the loud ferocious ‘clucking’ from the bathroom at 2 am! 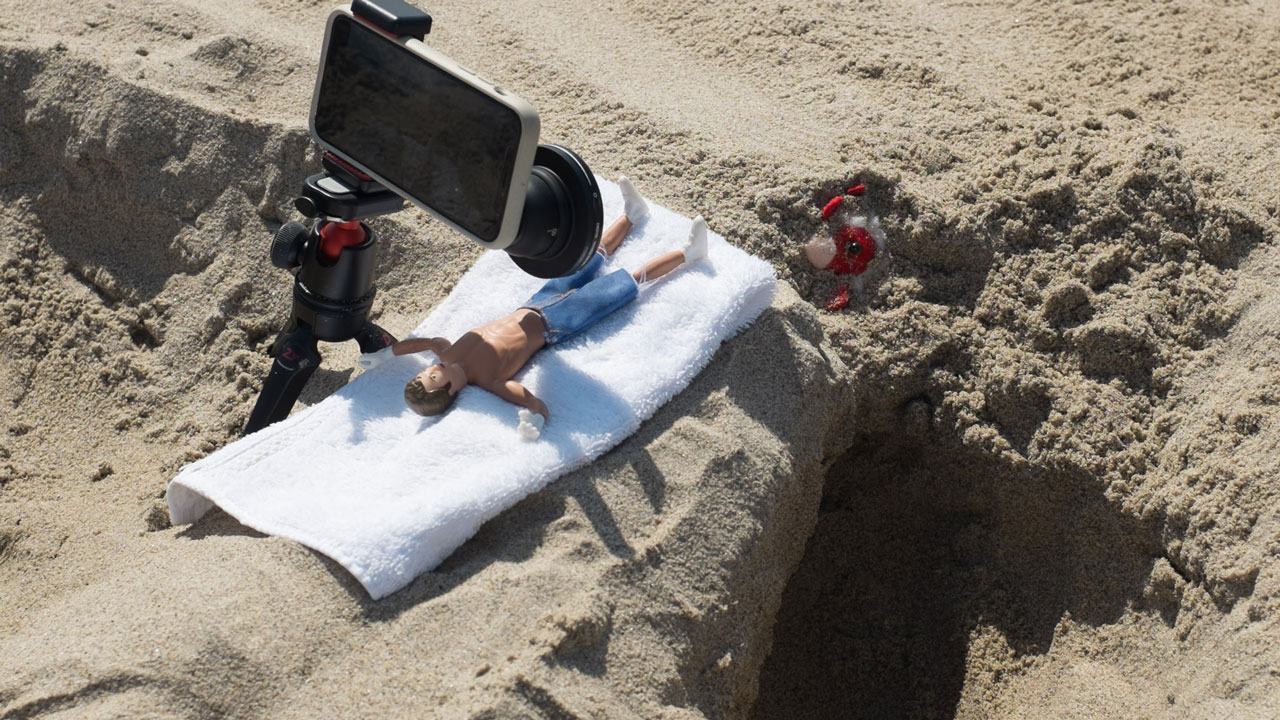 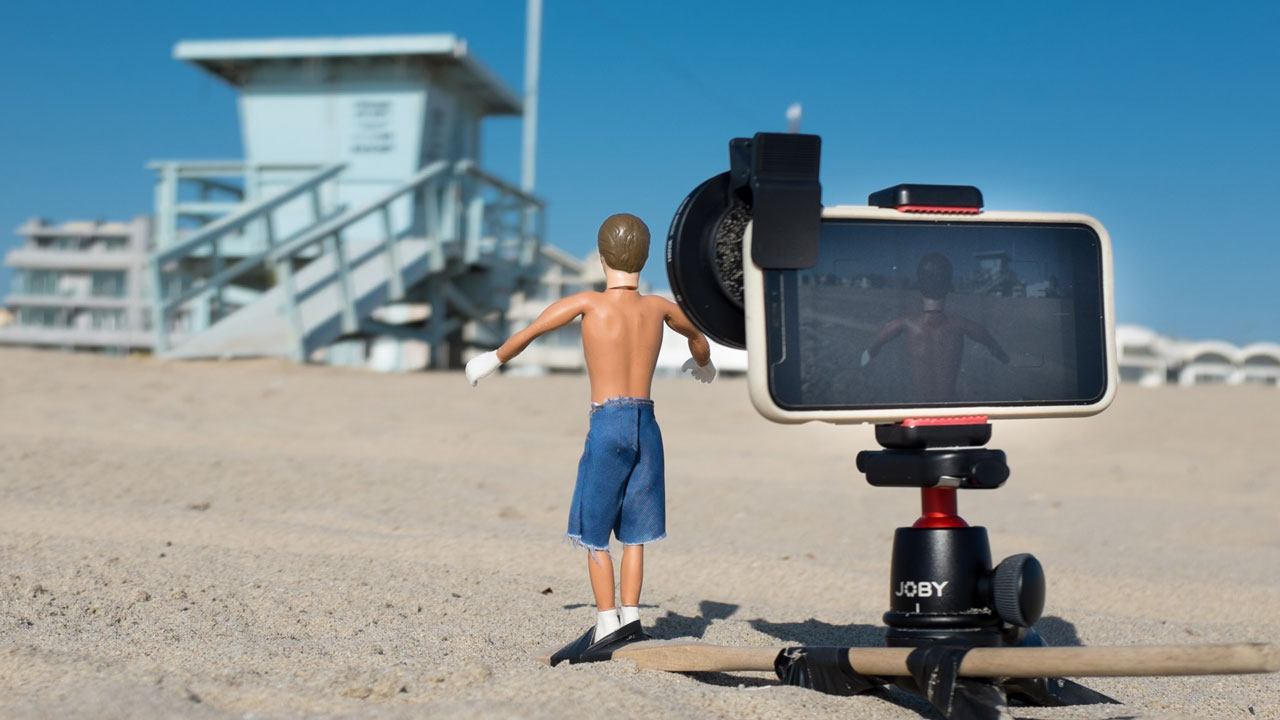 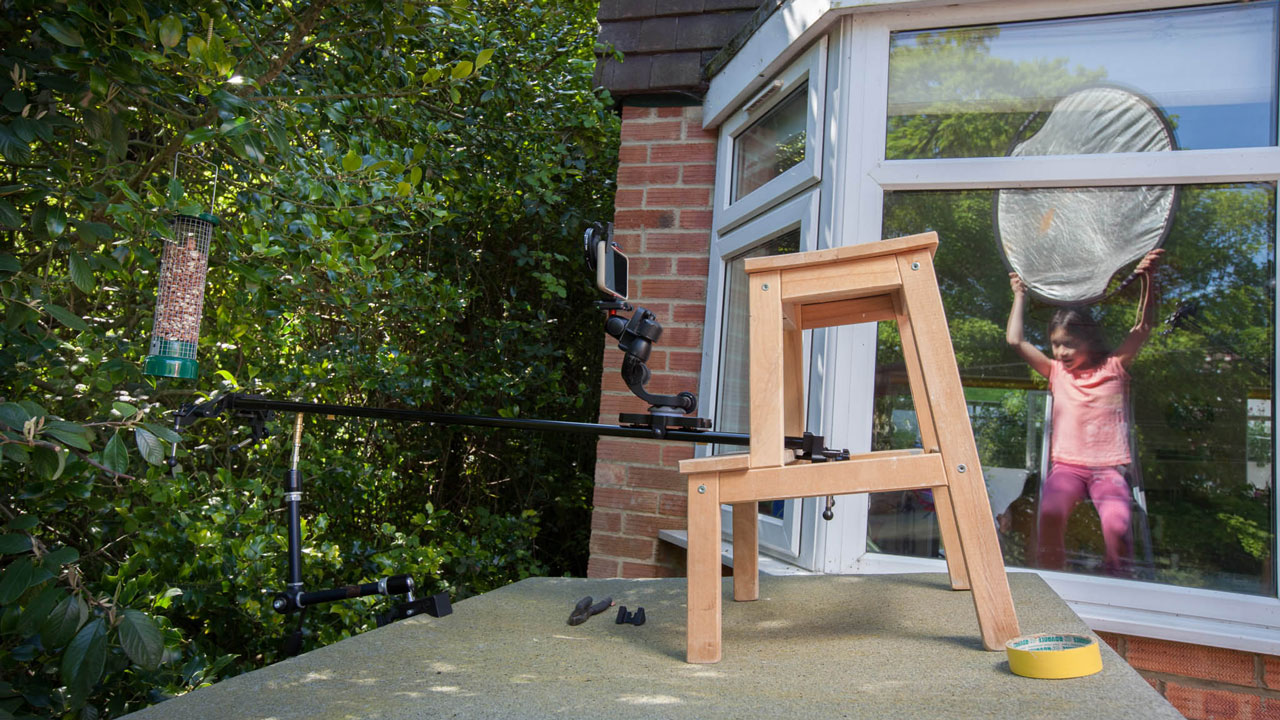 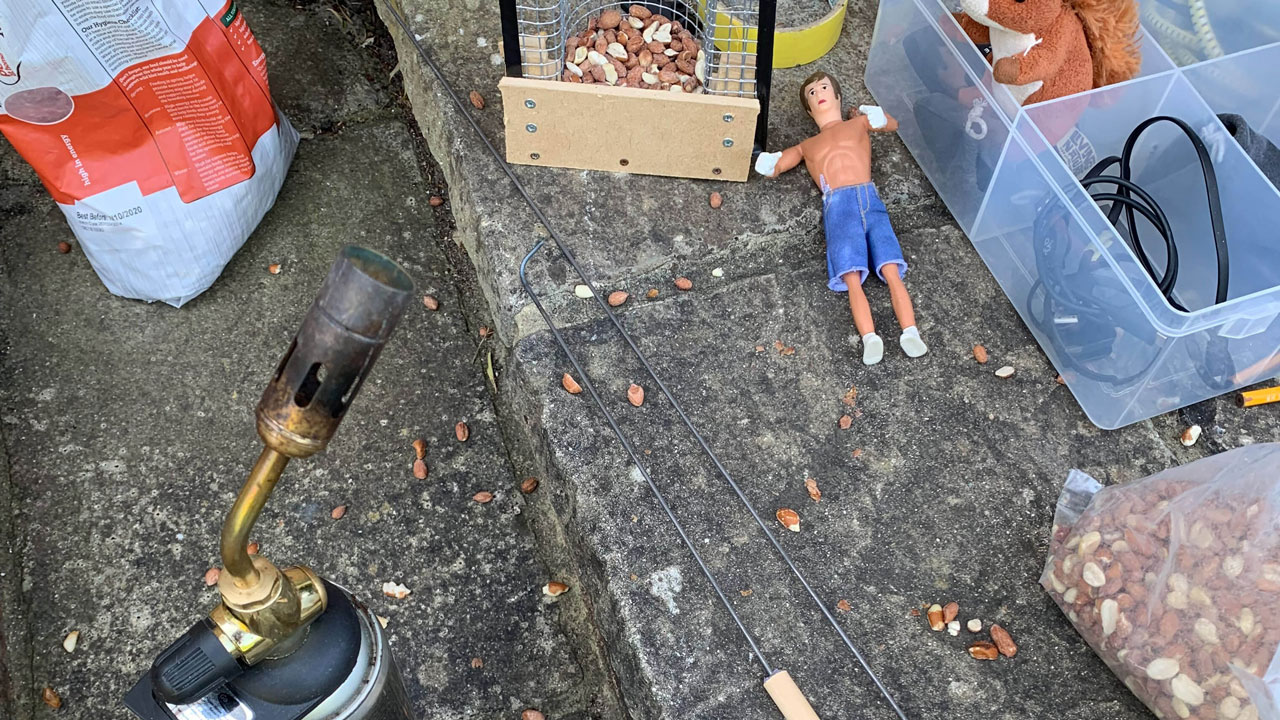 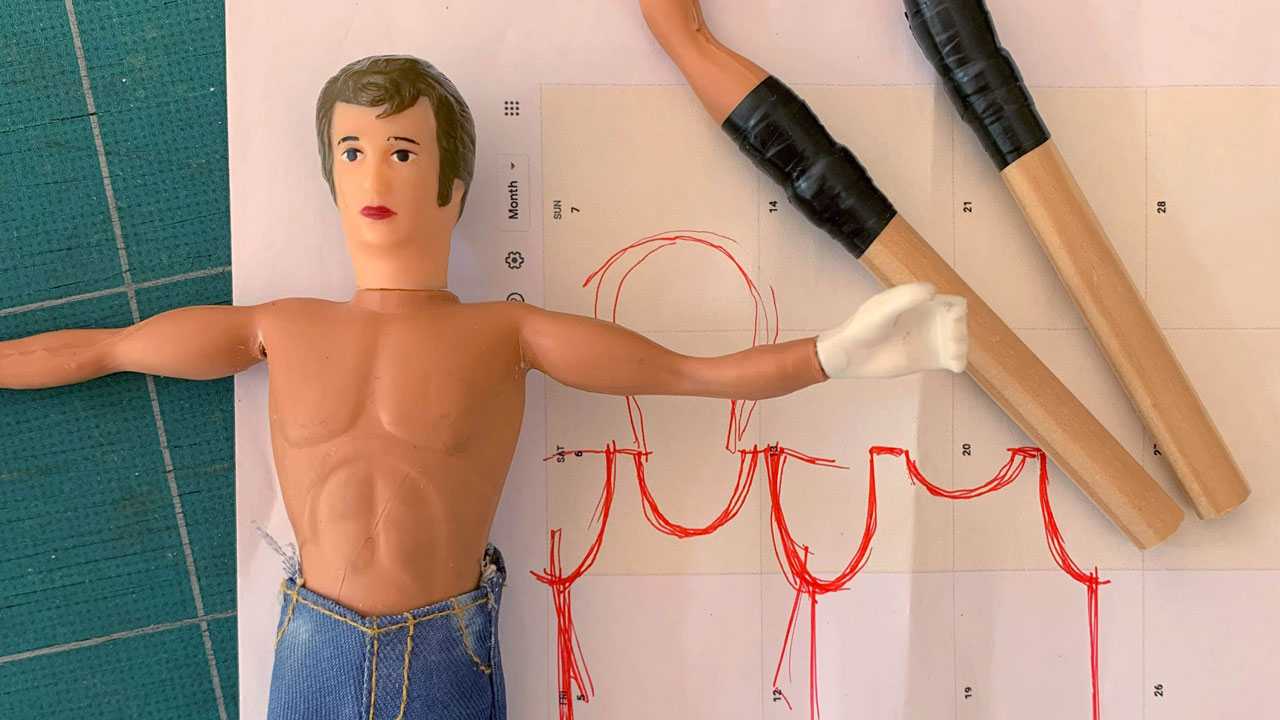 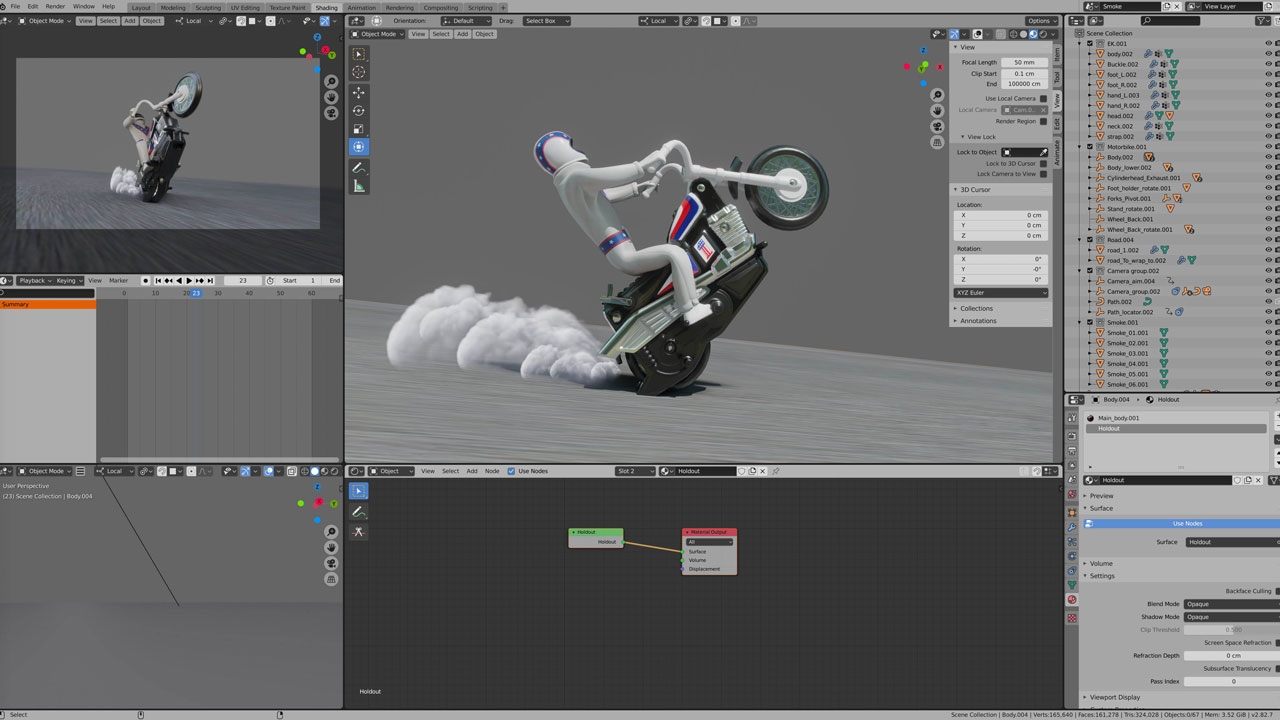 How were the films shot?

All of these have been shot on my iPhone using the FilmicPro app. It’s amazing.  It was perfect to shoot on because I needed a camera & lens which could get right up close to Evel, so the viewer felt that we’re with him. The problem is that he’s REALLY small (his head’s about the size of my thumbnail), so to get that close there was no way I was going to do it with a Canon 5D.  Plus as I’m shooting at such a miniature scale – the slightest movement is amplified, especially when watched at HD size.  Even with a gimbal or monopod/tripod, there can still be loads of shake and vibrations.

For Beach and Shower, I had very little in the way of gear, and ZERO assistance – quite different to the Barbie set I’d been on for weeks with a huge crew including DOP, lighting, puppeteers, dedicated props, and toy technicians, but this actually worked in my favour as it forced me to be extra inventive and resourceful.  I was staying in an Airbnb apartment at the time so I had to make do with whatever resources I could find there – essentially a few wooden spoons from the kitchen drawer. This was literally all there was, but they were perfect to support Evel and the chicken for the beach chase sequence.  I enjoyed these constraints and worked around them to make the story.

The shower sequence was pretty tricky. During one scene in particular I got completely soaked as I puppeteered Evel – meanwhile trying to keep the camera steady (and dry) whilst pulling focus. For this scene, I wanted to have a chicken casting a large shadow onto the shower curtain, but this was simply impossible without help.  In a later shot, I also wanted the group of chickens to be clucking away – not static – but this was something I simply couldn’t do on my own.  They’re static in the final shot, but I think the story still works.

With Bird Feeder, working from home it was great to have a few more props to hand, and certainly a bit of help from my family – including my partner puppeteering the squirrel and my 9-year-old daughter reflecting the sunlight. Having said this it still had its challenges: The bird feeder needed to be hanging in a bush outside the window – which was precariously located in a thorn-filled bush with an 8ft drop.  Plus the sunlight was beautiful, but only in that particular area for a few hours of each day so we had to shoot fast and chase the light around the trees.

There was one thing I hadn’t accounted for when shooting the time-lapse ‘day-to-night’ sequence… I’d set the shot up with Evel in the cage filled with nuts, with the intention of coming out every few hours to re-shoot as the lighting went down. I noticed a hungry-looking squirrel hanging out in the bush waiting for me to disappear, so I got my daughter to sit and watch the cage for the rest of the day to make sure it didn’t scoff all the nuts and eat Evel too!

There was also nothing straightforward about the sound design for this one. Each time I came out to record the wild track it seemed that EVERYONE in the neighborhood was out making as much noise as possible. I’ve never heard so many households mowing their lawn at one time. Every other kid was on a skateboard practicing jumps, builders with drills and chainsaws, an over-excited family playing on the nearby green, and distant trains passing every 5 mins. And this was at 9 am on a Sunday – it took hours to get what I needed as I had to keep coming back and hoping to catch a quieter moment.

Either way, it was well worth it, and now each time I approach my front door I look at the prickly thorn bush in quite a different light…

View more of Jamie Lancaster’s work via his Creator profile and Instagram @thejamlancaster.