What was the brief from ROG and how did our creative production team craft a story around this?

ROG came to us with a brief for a star-studded influencer film. (It actually feels a bit wrong to call it that, as their ambition went far beyond what you might expect from everyday ‘influencer’ content.) They wanted something bold and high-energy, that rallied a young gamer audience around the power of possibility and self-belief. They asked us to draw influence from the world of cyber-punk and bring to life their brand proposition of For Those Who Dare. Naturally, we were all over it.

What was the most difficult aspect of this project?

Aside from the usual production challenges it was probably the scheduling. Sounds boring but working with five superstars from five different worlds is tricky on a finite budget. Creatively, we were pretty clear on what we wanted to do from day one, and the clients (shoutout to Shin, Nina and Hannah) were amazingly collaborative. But the logistics had to work for people playing in the Premier League / shooting Netflix shows and conducting worldwide stadium tours. We somehow managed to consolidate five global superstars into three jam-packed shoot days and to this day I have no idea how we managed it. God bless you, producers.

With multiple deliverables spanning different markets, what considerations had to be made to ensure the story was consistent and engaging in all the films?

For me this is about the simplicity of the message. It’s not that we can’t deploy post-modern film theory and non-linear storytelling. We can and do. But that wasn’t the brief. The brief was for everybody, regardless of nationality of background, to understand how empowering it can be to believe in yourself, and make an association between that empowerment and ROG’s performance technology. When we’re speaking to a disparate audience across a wide range of touchpoints — teaser, stills, website, hero film etc — it’s always our goal to say something authentic and human. Something universal.

What was your favourite part about working on the project?

Honestly… there’s too many highlights to mention. This was such a great job with a unique mix of people and they all brought something incredible to the table. I’ve been following Nyjah Huston since he was a little kid. I used to play as him on Tony Hawk’s Pro Skater 2 so… to write something for him, and to have him blasting big gaps on our set was pretty major. But everyone who contributed to this was amazing — Alan, Asa, KAT, Son. All a joy to work with. And an incredible opportunity as a creative person.

Anybody who knows me will attest — I love my job. It’s pretty much all I’ve ever wanted to do. But there are times when even I start to question myself. Doing a large-scale indoor pyro shoot on the hottest day on British record (yes, the day when the trains broke and the roads melted) was definitely one of those times. But we’re a blood, sweat and tears operation (mainly sweat in this instance) and I like to think you can see that in the finished product. 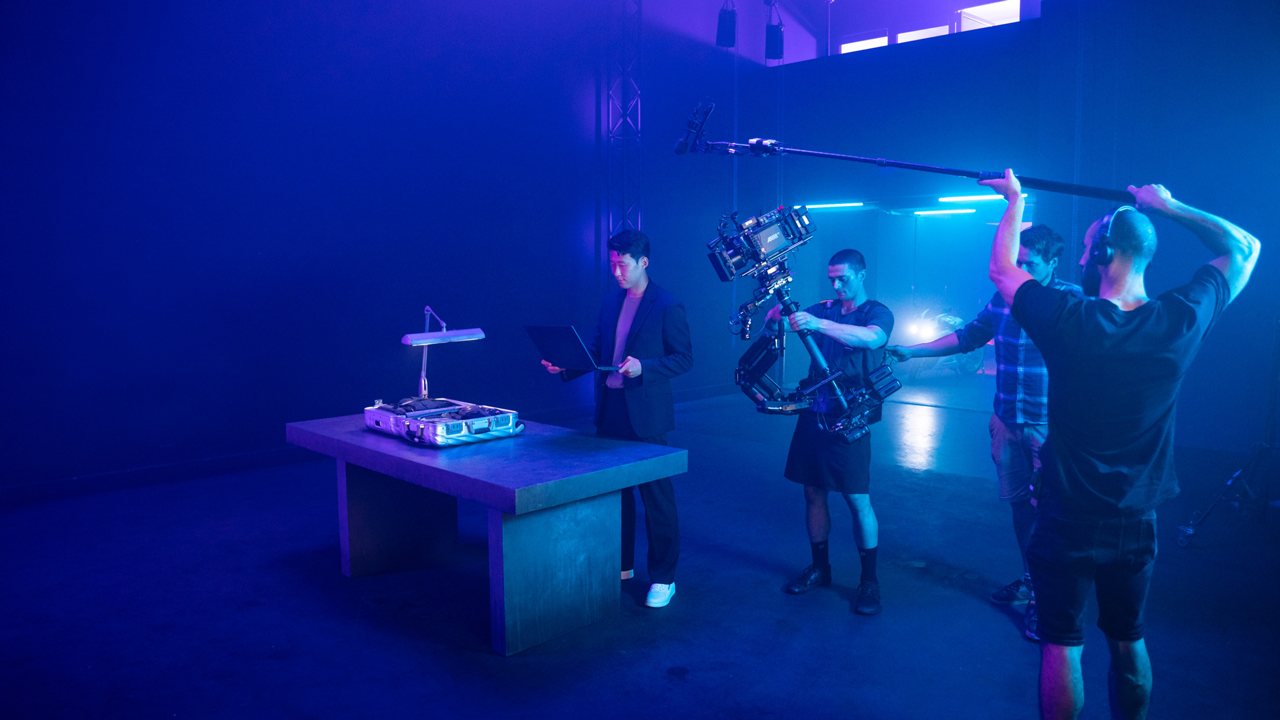 You can get in touch with Tom and our Creative Production team to discuss your upcoming projects here.