Filmmakers, Jumpcut, have an extensive background in both comedy and stylised visual storytelling with credits across advertising and music videos.
Community December 1, 2021

Jumpcuts most recent ad, WWF Christmas, was a critical and commercial success. The important film tells the heartbreaking truth of the global challenges facing wildlife as a result of deforestation and encourages you to adopt an elephant.

Jumpcut hail from planet earth, and are inspired by Sesame Street, Pingu and the A-Team. We sat down with them to find out more about their personal journeys that led them to directing.

What work has influenced your own style of filmmaking? It’s certainly not traditional.

What hasn’t influenced our style, is more to the point. Being a multi-generational and multi locational outfit we have quite literally an endless number of reference points that have made their mark on our style over the years. Key influences though would have to include, Sesame Street, Pingu and the A-Team.

Can you talk through your personal journey that led you to directing?

If there’s one thing, we do all have in common, it’s our upbringing. We all, at one time or another, passed through a very particular creative arts school reserved only for the visually gifted, where we were all taught exclusively by retired film makers turned baristas. Best way we can describe it is like when Bruce Wayne goes up the mountain to pick the flower and hangs out with Liam Nesson.

What was it like working with Anthony Joshua on Lynx’s 25 year anniversary ad?

Well, as long as you don’t get him wet, he won’t punch you. Which is good. As he’s quite tasty with his fists.

Can you talk about creating an ad that lives up to Lynx’s reputation of most memorable and impactful ads in TV advertising?

Honestly, we tried not to think about how much iconic Lynx advertising has gone before. It’s like a ‘never met your heroes’ type thing, isn’t it? As if you did get to meet Steve Irwin or Alan Smithee you’d lose your cool wouldn’t you. Or you’d be dreadfully disappointed. Luckily it wasn’t the later in this case. But how do you beat the best when it’s your turn? You just spray on a liberal dose of Africa, step up and do your best. Then you just hope the production doesn’t involve getting Anthony Joshua wet, and you can use the magic of visual effects to avoid getting punched in the face. That’ll always take your mind off the reputation you’ve been entrusted to uphold.

What was the inspiration behind taking a trip down pop culture’s memory lane?

Luckily figuring that out was all down to the megadudes at the agency. Our job was to visually fit 25 years into 30 seconds. Or was it 60? We can’t remember, it was so wild it’s hard to remember. 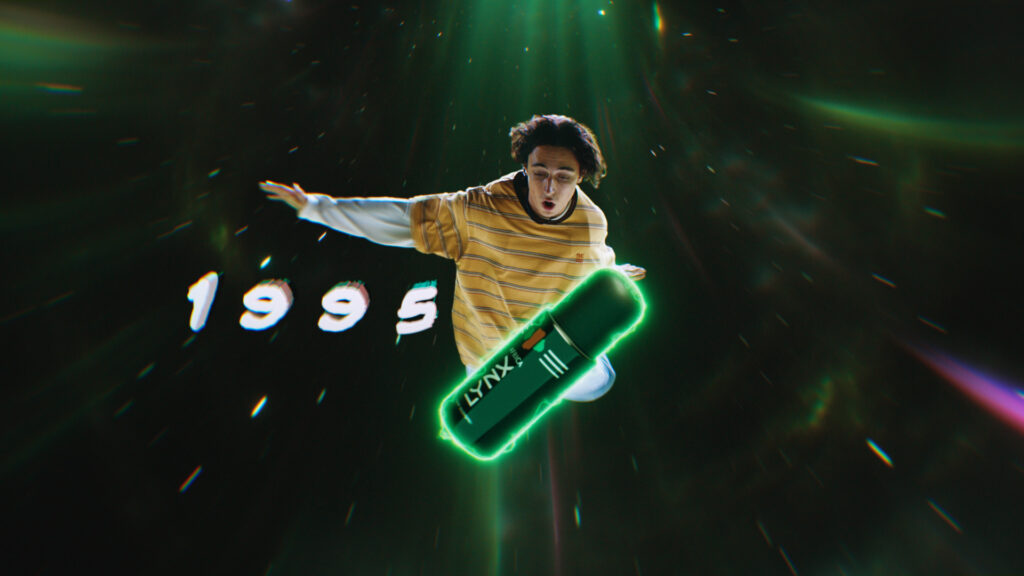 Fav Lynx ad over the years and why?

We’ve thought long and hard about this one. Hmmmm. We’d have to say it’s Lynx ‘First Impressions Last’ from the 80’s. The one where two people are making calls at a payphone before they board a cruise liner. Yes, a cruise line, and yes, a payphone. The also both have all their clothes on which is weird, and the lady keeps dropping her wallet. It’s her gloves you see. They’re making it really hard to hold onto the wallet. But once she gets a waft of the Musk. Yes, musk. It’s pure passion. You can clearly see The Lynx Effect in it’s rawest form writ large. It’s what we all signed up for.

Why do you think Lynx ads are so popular?

Personally, we think it’s something they put in the product. You see, everyone at one point or another in their lives have sprayed Lynx on themselves. So we reckon there’s some chemical engineering that pre-disposes the user to go cockahoo whenever a new Lynx ad comes on. A bit like that smokey dust stuff that Cillian Murphy uses in that other Batman film. Then from there it’s just a chain reaction. Once you’ve had your NDA altered, they’ve got you. For life. The user loves that product, the user loves the adverts. Just round and round it goes, growing every year. So now it’s over 25years old, that’s a lot of fans and a lot of ads. We can’t see how that’s all possible without some sort of magical chemical trickery. (*declaimer: If it’s not that, then Lynx, their agencies and their production companies have done a bloody great job. Bravo. But we defo think it’s the chemical trickery)

Which details made you especially proud?

We feel particularly proud of not getting Anthony Joshua wet. Phew.