VRChat is a free-to-play massively multiplayer online virtual reality social platform created by Graham Gaylor and Jesse Joudrey. It allows players to interact with others as 3D character models. VRChat lets you create, publish, and explore virtual worlds with other people from around the world.
Thought September 17, 2020 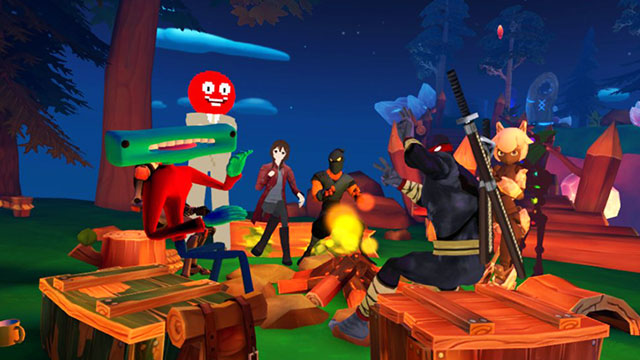 Please note the following are hypothetical ideas and do not reflect any VRChat features in progress.

VRChat has been going since 2014, how have you seen the VR landscape develop since then?

Today’s VRChat is hardly recognizable as the same app that was established in 2014.  Back then, users would gather in The Cafe, which was the only world that existed.  There was only one avatar choice available.  We called him Karl.  In those early days hands weren’t even a thing (hand controllers weren’t available for VR headsets!).  Keyboard and mouse were the primary method of input, and users would hang out as Karl in a t-pose. A t-pose is the default pose 3d characters appear in before they are animated.

VR was in its infancy stage without any bells and whistles.   Owners of headsets were either early adopters highly interested in the tech or budding developers.  Conversations in VRChat remained techy in nature and participants weren’t your average recreational user. The founder of Oculus and creator of the Oculus Rift, Palmer Luckey, could be found in VRChat.  Then things started to slowly improve as headset makers started releasing hand controllers.  Users could now move their hands in VRChat and even begin to make custom avatars and worlds.  These advancements attracted a wider audience of users.

As of August 17, 2020, VRChat tracked the number of its users as more then 21,000 concurrent online users. This reflects incredible growth as in 2017 there were only several hundred concurrent users.  The community has diversified as well beyond the tech early adopter market to all forms of media and industry marketing. These new focus areas foresee additional substantial growth. 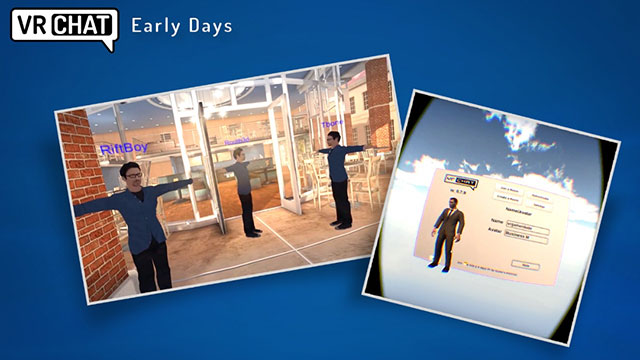 Talk us through the basics of VRChat: what do you need to use it? How many players max can be in a world together? What functionalities can the players make use of?

What do you need to use VRChat?
To play VRChat, all you need is one of these:
– An Oculus Quest
– A fairly modern gaming computer with either Steam or the Oculus PC client installed

As long as you have a fairly modern computer, you do not need a VR headset to play VRChat. Simply install the application on Steam, launch the application, click “Desktop mode”, and you’re in. The controls are very similar to most first-person games, with movement on WASD, the head controlled by the mouse, and the menu on Escape. You can see more bindings in our Settings menu by clicking Bindings in the top right.

Optionally, if you have a gaming PC, you can use a VR headset! You can use any headset supported by SteamVR (HTC Vive series, Valve Index, Oculus Rift S/CV1, Oculus Quest Link, Windows Mixed Reality). If you’re using Oculus, you can use the Oculus Rift S, Rift CV1, or the Quest via Quest Link*.

*(Quest Link is a method by which you may use the Oculus Quest connected to a PC, using the power of the computer to run VRChat instead of the standalone headset. This is called Quest Link, whereas we refer using the headset by itself as Quest Standalone.)

How many players max can be in a world together?
This is dependent on the “capacity” setting set by the world author. The maximum capacity you can set is 40. However, you can “squeeze” in more people beyond that capacity by using invitations or portals, up to double the capacity setting.

What functionalities can the players make use of?

A lot! It is a bit difficult to list the functionalities of VRChat, as our talented community builds the vast majority of content available on our platform. We simply provide the tools.

We have built-in social features like making friends, sending invitations, creating new “instances” of worlds (think of it like making a new game lobby), go through portals, change and wear avatars, and more. We’ve always got more features on the way!

However as noted previously, the real power in VRChat is in the tools we provide to our community. Using our Software Development Kit (SDK), you can create any world or avatar you can think of, with a ton of powerful functionality.

VRChat Udon is our in-house programming language that powers our latest and greatest worlds. Using Udon, you can create extremely complex and deep game worlds, simple hang-out worlds, amazing VR experiences, and more. Essentially, you can make your own VR creation using VRChat Udon without having to worry about all the stuff we’ve already built into VRChat.

In addition, VRChat has the most powerful avatar system around in Avatars 3.0. AV3 (as we call it) is a brand new way to create expressive custom avatars. Supported by the Action Menu, these avatars are capable of putting on all kinds of performances and allow people to express themselves in dynamic new ways. This new system is still in development, but we have already seen our community create very powerful, innovative avatars.

Finally, all of these worlds and avatars are created with the industry-standard Unity game engine. As long as you can put it into Unity, you can use any 3D model asset you’ve created with any authoring software. 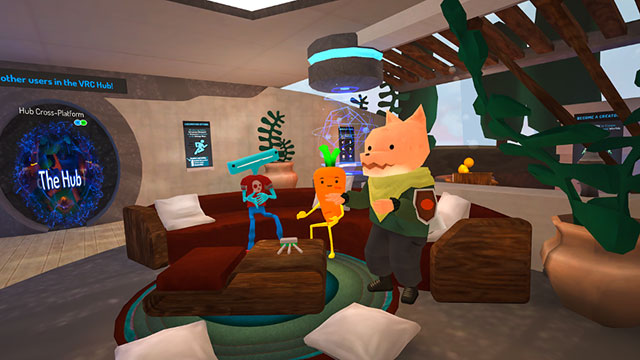 Let’s take a look at advertising potential in food delivery and fast forward a few years.  Imagine you are spending a night hanging out with friends in VRChat.  You have on a VR headset, but it’s wireless and very lightweight.  While socializing with your friends on the surface of Mars (which happens to be a photo scan of the actual planet), you start to feel hungry.

It’s a weekend and it’s been a tough week at work so you decide it’s time to indulge in some pizza.  With a few clicks you summon the pizza shop representative to your room, and at that time everyone else disappears but you and the representative while you make your order, ensuring others in the space don’t hear you give out your personal information.  All along your friends see a cool looking visual indicating that you are making an order at that particular pizza shop.

An hour later and the pizza has finally arrived. A pizza icon pops up in front of you alerting you that the order has arrived. You walk to your door, still in VR.  After grabbing your pizza another alert appears informing you that you can get 10% off your next order if you display the pizza shop animation while you eat.

No one else in the space sees these alerts, all they see is the pizza shop animation encouraging them to get pizza from this shop if they too are hungry like Bob.

Do you see VRChat progressing into other advertising or consumer areas in the future?

VRChat has a thriving growing community of users that don’t visit VRChat just for events, but come back regularly to spend time with friends, coworkers and family.  They hang out in areas resembling their real world counterparts: bars, clubs, theaters, or even a comfy house.  Users interact with items in these different environments such as beer in a bar, candy in a movie theater, or a TV in a comfy home.

There’s definitely some opportunity for things like sensible product placement. Bottles of drinks, candy, food items, toys– these are all things that are present in many VRChat worlds and with partnership, could be branded items that don’t get in the way. Product placement is already a very important tool in an advertiser’s arsenal, but it is critically important that those products make sense in the environment they exist in.

A recent world called “The Devouring” was a runaway horror hit in VRChat and made by 4 community members as a fun project.  The goal was to solve puzzles to escape a haunted house.  The developers found that many players would carry around a plush bunny during their adventure, as it made them feel safe.  A member of the group while going through this experience even gave the bunny a name.  Much like the plush bunny, VR feels so real to people that they place special value on items in a world, whether it’s a comforting bunny or that beer you always drink when relaxing with your friends at the virtual pub.  This emotional connection can potentially result in stronger engagement with a brand.

Advertising can be a productive and exciting adventure in VRChat if its properly managed. I can’t recall the number of times I’ve been in a VRChat world and heard things like “It would be amazing to hang out in a (game/show/movie) world.” Imagine if you could hang out on the set of the latest big TV show, watching that show with your friends in VR! Maybe you could wear one of the characters as an avatar, take it a step farther and record a meme video? 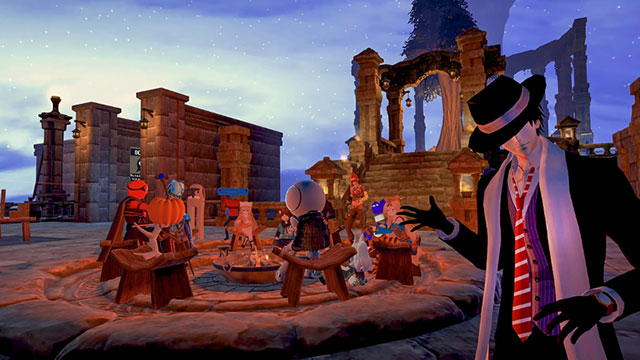 VRChat supports full-body humanoid avatar tracking via Vive Trackers, can you talk us through what it is and how it works?

Standard VR setups provide a headset plus a controller for each hand which allows us to interpret the motions of the player’s upper body, however the lower body has no tracking and must be simulated procedurally.

VRChat also supports full-body tracking, which adds three additional Vive Trackers attached to the hip and each ankle. It uses a simple calibration method so exact positioning is not required. The additional tracking points allow us to solve for the lower body movements along with the head and hands, which combined together, can follow motions of the entire body. The fidelity of this tracking is good enough to match the motions of complex dance moves, including spins, flips and hand stands.

VRChat hosts a vibrant dance community that takes advantage of full-body tracking, often with completely wireless setups, and there are multiple parties every week where you can see dance clubs filled with people dancing with full-body tracking setups.

What’s next for social media and virtual reality?

I can see VRChat being a jumping point into all other experiences, whether that’s shopping, gaming, or watching tv/movies.  Users identify with and stick to a preferred avatar long term.  With my VRPill avatar, I feel odd entering other VR apps and not being that avatar.  It’s my online identity in a way that’s much stronger than a simple profile image on a forum.

In the near future a user might not have to leave VRChat to play a new game.  Similar to buying a copy on Oculus or Steam, they might buy a VRChat copy of that game and be able to play as their VRChat avatar, with their VRChat friends who also own a copy of the game.  When I want to watch the new episode of my favorite show I would just meet with my VRChat friends and jump in a world custom made for that show.