We’ve teamed up with Riot Games Music and Wave, the leader in virtual entertainment, to create a first-of-its-kind interactive concert with chart-topping band Pentakill from League of Legends. Directed, produced and crafted at The Mill, with entertainment architecture from the world-renowned StuFish studio, the full interactive album experience will premiere on Wednesday, September 8, 2021 at 1:00pm PT on Wave’s platform, wave.watch.

A collaboration between The Mill, Riot Games and Wave, Pentakill’s Lost Chapter: An Interactive Album Experience will take fans on a journey through the full concept album before it drops following the show.  Audiences will immerse themselves in the experience, engaging with the band and each other like never before through live chat, voting and seeing themselves live on stage alongside Pentakill. Wave will also be rolling out new features developed specifically for Riot Games that will grant fans the power to influence the performance in real time, for the most integrated storytelling experience to date. Directed by The Mill’s Rogier Schalken and Sally Reynolds, working in partnership with legendary concert entertainment architects StuFish, and renowned musical performance Creative Director Lee Lodge, The Mill Experience team designed a full rock show; a musical performance rooted in the physical design and stagecraft of classic stadium and arena performance, and enhanced by the possibilities of the virtual world. 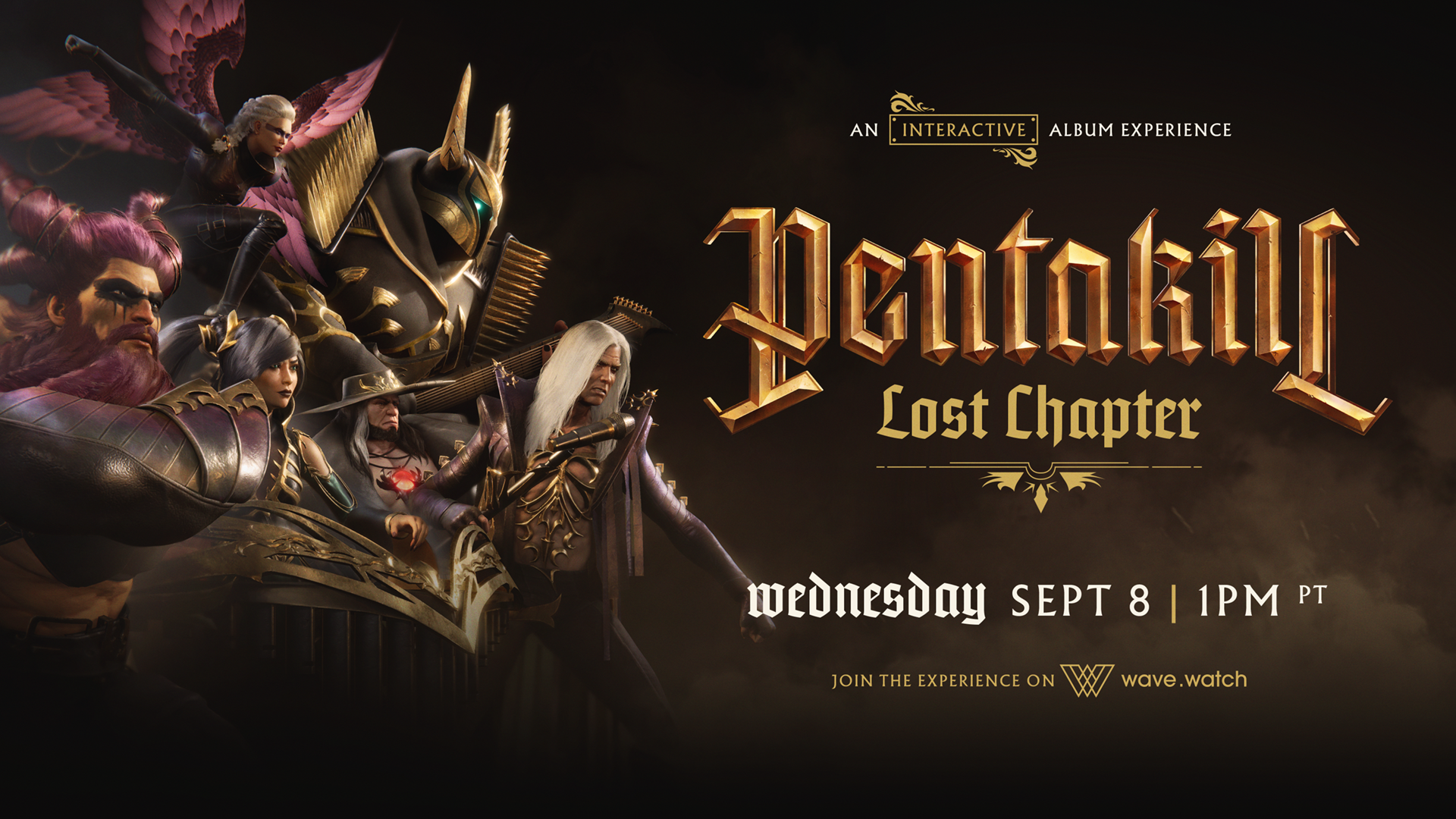 A heavy metal band stretching the limits of the imagination, Pentakill is a force of fantasy-driven power metal performed by a rich and varied cast of characters. The group is fronted by the lich Karthus, who’s joined by the unstoppable guitarist Mordekaiser, virtuoso keyboardist Sona, grim bassist Yorick, berserking drummer Olaf, and recently-added warrior goddess Kayle on vocals. They are quickly becoming one of the most popular, virtual heavy metal bands, reaching the Billboard Top 40 and topping charts on iTunes. Previous albums, Smite and Ignite and Grasp of the Undying, feature collaborations with well-respected metal musicians including Tommy Lee, Nine Inch Nails alumnus Danny Lohner and Noora Louhimo of Battle Beast. Lost Chapter is set to be the band’s most interactive performance to date.

Fans can experience the interactive show for free on Wave’s platform, wave.watch. For more details, including an exclusive behind-the-scenes look at the album experience, visit wave.watch/pentakill and sign up for a free account.

“The future of live performance is about to get rocked to its foundations by the most ambitious, one-of-a-kind proto-Metaverse experience ever created. This live and interactive virtual stadium show smashes the boundaries of real-time technology and extended reality to launch the third album by Pentakill, League of Legend’s virtual metal band and transport fans closer to their bludgeoning heroes than ever possible before. We believe that superior craft equals deeper immersion and in that spirit we have brought together the world’s best creative technologists, real-time CG artists and maniacal gaming geniuses to set a new bar for music, entertainment and branded interactive experiences.”

Want to know more? Go to wave.watch/Pentakill for more details or get in touch with our Experience team to start your interactive brand marketing project today.